Briscola is the Italian card game similar to bridge in that there are four suits and one of them becomes the dominant Trump suit for any given hand. One difference is that the Trump is assigned by complex bidding in bridge and it is a random turn of a card at the beginning of the game in Briscola. Other advantage of Briscola over Bridge is that Briscola can  played quite nicely with either two players, or four players (two teams). In either case you use the same Italian cards that you use for Scopa.

The card ranks, for scoring and taking tricks goes almost in expected numeric order, Ace high, then the Three (no idea why its in this spot in the hierarcy, it just is) then the King and so on down the line to the lowly deuce.  In Scopa, the seven of money card rules, here in Briscola it’s all about the 3’s and the aces. 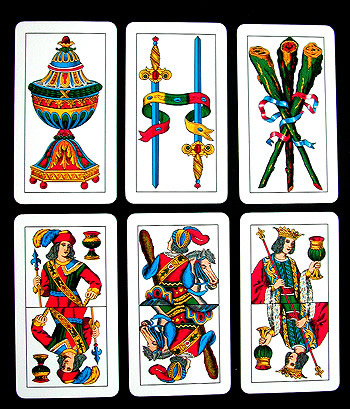 Shown here are a selection of Piacentine cards. The points following each are their respective ranking values when taking tricks-same for any suit. They are, left to right, starting on top row, the ace of coppe (11 points), a two of spades (2 points), three of clubs (10 points) infante of coppe (8 points), cavallo of clubs (9 points) and il re of coppe (10 points). Obviously, a 4 is worth four and so on.

For the purpose of learning, lets say its two people, just you and I and a pack of Italian cards. Imagine you can hear the happy chatter of Italian gossip all around you and the clink of cups and the whoosh of the expresso machine in the background and the picture is complete.

THE RULES: THE BIG THREE.

HIGH CARD WINS. No surprise here. If we both play spades and yours is higher numberial rank, you win. Pretty basic. King beats Cavallo, Cavallo beats Infante, Infante beats 7. Etc. Remember, the Three beats all but the Ace.

FOLLOW SUIT. If I lead a spade you have to follow with a spade. If you want to beat me, with out a trump, that is. If, for example, I play the 2 of spades and you put down the ace of clubs, I still win because you didn’t “follow my lead”. The exception to this is …

TRUMP ALWAYS WINS. Just ask “The Donald”. If I play the ace of a non Trump suit and you play any card of the Briscola or Trump suit, you win. Obviously, if you play one trump and I play a higher one, I win. Yeah.

You be the dealer. Shuffle. Deal me three cards. Please. Then deal yourself three cards. Then flip over the next card in the deck and put it face up next to the cards you haven’t dealt yet. The suit of that card looking up at us is the Briscola/Trump suit for this hand. Since you dealt, I’ll go first and play one of my three cards. You don’t have to follow suit, but you see how to win, from above paragraph, so play accordingly.

When we get down to the last two cards, one facing up (the one that from the start has determined the Briscola) and one face down. Whichever one of us wins the last trick gets the card facing down and the loser gets the one facing up. There are all kinds of strategies around whether to take or not take that last trick. Practice will tell. And luck. Play continues as normal without drawing, since at this point there are no cards left to draw.

When we are both out of cards its time to quit playing and do the scoring.

The object of the game, as in any nice competitive sport, is to get more than the other guy. In Briscola there will be a total of 120 points so you want at least 61.

Here’s how it all adds up

The student surpasses the teacher. Always happens. I taught my friend Harry to play Scopa one day at a lake side outdoor café in San Feliciano over coffees and gelatis. A finer way to fritter away a lazy Italian day, I can not imagine. Back in Colorado, Harry taught his son Jeff to play and Jeff soon taught all of his friends and eventually came to Italy to play with some real competition.

He moved on. He met Aldo, everyone’s favorite barista/confidant in Panicale. He took Jeff under his wing and explained that any goof ball could play Scopa (Wait, a minute. I represent that) but that if he was looking for a REAL game, he might be ready for Briscola. And then introduced him to the game. Later, former Alitalia pilot Riccardo would step in as his mentor and teacher. That’s how he became the fearless card shark he is today. Watch out if he should sit down your table and snap the rubber band off his now well worn deck of Piacentine cards looking for a game. Rest assured he’s played a few hands. And that the rules here have been checked him.

The pictures are of Jeff playing some of his worthy local adversaries. In the first shot, he’s well into his daily warm up game with Adriano in the piazza. Then, he’s playing Angelo – the current Panicale Briscola Champion and our intrepid insurance agent. In the final shot, he’s shown playing his friend and teacher, the merciless, waiting-in-the-weeds-for-sweet-revenge, Riccardo who came in second place in the championship. None of these players take their eye off the cards very long when playing with Jeff. He’s playing for keeps. Well, except when he’s playing Aldo. Then it is for gelati!

OK, as they say in Italy “in bocca al lupo” Good Luck!

And remember when someone says "in bocca al Lupo" the only response is "Crepi Lupo!" So literally one person has said "in the wolf’s mouth" and the other has responded with (sort of) "I ain’t afraid of no wolf!" Makes no good locigal sense but then think about how we tell actors to "break a leg".