Just saw the HGTV episode of House Hunters International with our clients Bob and Carolyn finding their new home in Umbria with Giancarlo. 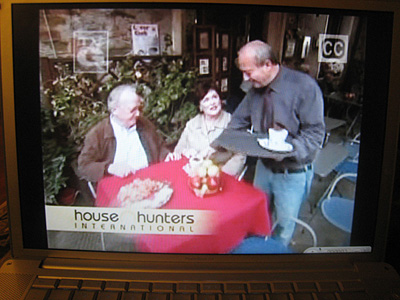 Just saw the HGTV episode of House Hunters International with our clients Bob and Carolyn finding their new home in Umbria with Giancarlo. Complimenti a tutti e tre. Well done, nice 20 minute tour of the area and some properties. And nice cameo by Aldo of Bar Gallo too. If you missed it on first run, it looks like it will be on again very early in Dec. For dates and times, see the link on an earlier blog

I could almost see our house and some of its wisteria in one scene where they were being interviewed outside. And you may recognize many places in Italy in the course of the show. We could certainly see Panicale, Paciano and Castiglione del Lago.

But first thing in the morning Andrea whips up a couple dozen loaves of bread in it. Our first night in town, before we knew they were baking their own bread, I said “Andrea what is this fantastic bread with these little black things in it?” Turns out that was the right question.

PANICALE, Umbria– One of my favorite things to do in Italy is to watch our little town come to life in the morning. Bruno unloading carts of groceries into his wife’s grocery’s storeroom. Emiliano and his Ape are out and he’s sweeping the street with his stick broom. Sometimes I like to poke my nose into Masolino’s Restaurant and see if I can bother Andrea. His whole family has been up till surely midnight, cooking, cleaning the spotless kitchen. And yet, here he is in the kitchen. Bread making. “Getting pretty close to getting in sister Stefi’s pastry-making zone” he admits, making that kind of dismissive, circular motion of his hand that seems to say “but here we go anyway.”

This is a new passion for him, tied in with their new German oven. It is in action during lunch and dinner every day and generally is slow cooking some thing over night, every night. But first thing in the morning Andrea whips up a couple dozen loaves of bread in it. Our first night in town, before we knew they were baking their own bread, I said “Andrea what is this fantastic bread with these little black things in it?” Turns out that was the right question. He was happy to talk about his new bread baking skills and tickled someone noticed. How could I not notice black truffles? Being warm gets the truffles all excited and they start throwing off waves of that truffle perfume every time you go to take another bite.

The day I took these pictures, it looked like he was cooking a green salad. But no. Onions and leeks. Just making them “sweat a bit” in the pan he said. When he had them how he wanted them he added them to bread dough and put the loaves into the oven and told it to have them ready at 12 noon, sharp. Wonder what tomorrow’s bread du jour will be? Finding the answer to that question is just about all the excuse I’d need to get back on the plane.

Aldo just told us. Tigre died last night. He asked us to make the announcement here.

PANICALE, Umbria, Italy–
Cold and dark outside. Bar Gallo was empty and quiet for a moment. Aldo just told us. Tigre died last night. November 3rd, 2009. Aldo asked if we would place an announcement here.

I thought Aldo was going to cry. I know he wouldn’t be the only one there that felt that way. But he more than anyone else. Aldo had warned us it was emminent. I chose not to believe Tigre could ever be anything shy of ten feet tall and bulletproof. I know he was “only a cat” but what a princely cat he was. Let Venice have the lion of St Marks. Tigre in many ways was a symbol of Panicale. Our guardian at the gate. We don’t throw coins in the fountain here and think of coming back soon. We pat Tigre.

If you noticed, there are lots of cats in town. But there was never another feline, of any stripe, anywhere near the piazza. And canines were only there provisionally. Right to the end. Only last week he was catnapping in one of the new chairs in the back part of the bar when a long haired lap dog pranced by on a leash. Tigre raised himself up majestically, and sphinx-like fixed the dog with a laser beam look that said “I’ve got my eye on you” De Niro couldn’t have said it better.

After Aldo broke the news to us I asked if there would be a funeral and he said he had done it. I said I meant at the church and with black trimmed posters plastered to the outer walls of the village. Failing that, here’s perhaps a way we could help his memory linger on: with a collection of his photos made into an iBook to leave in the bar. Surely there was never a cat more photo-documented by people in Panicale. I’m trying to sort through my pictures of Tigre. Send stories or photos to info@seeyouinitaly.com.

Here’s one of my favorite Tigre Tales. There is an opening blurb about some press coverage Panicale got in a big Italian magazine. After that first short paragraph, it is all Tigre at his macho best: “Tigre explains life to the Great Danes. And their little dog too.” There is a photo of Tigre there as well.