PANICALE, Umbria – Was it really sit-in-the-park-reading-a-book weather yesterday in both
New York and Chicago? 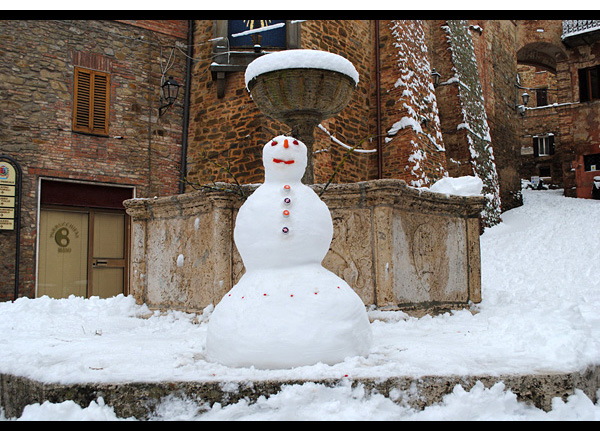 AND IT SNOWED IN PANICALE!? And lots of it? Che sorpresa! I saw it on my iPhone weather thing but sort of put it out of my head. We’ve been there for snow storms but its so rare I went into minor denial. Until just now when our friend Katia sent us an email.

Check out Katia’s fine rentals site to see lots of brand new, fun-in-the-snow shots.
They are all from earlier today!

If you have ever been to Panicale, but haven’t yet seen it in the snow, you are in for a surprise. It looks like close to a foot of snow and it looks like everyone is having a ball. Snow ball? Allora. Enjoy! 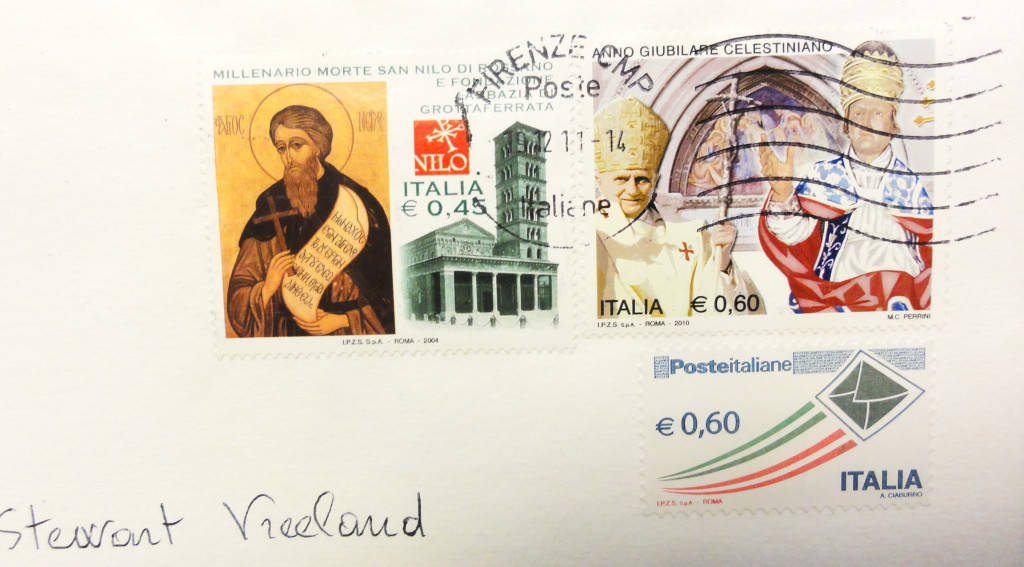 CASTIGLIONE DEL LAGO, Umbria– Giancarlo’s Christmas card arrived right on schedule and it was great as usual. But the envelope was an additional celebration this year. Those stamps are a couple inches wide and is it just me or do those popes and saints look about life size?

Thank you for sharing these reminders of the Holidays with us, Giancarlo.

Buone feste!
See you in Italy,

BUON NATALE A TUTTI! BUT. DON’T FORGET SAN STEFANO’S DAY… THE HOLIDAY THE DAY AFTER CHRISTMAS
Did you know this day after Christmas is a holiday in Italy? I can relate to that. Christmas is on a Sunday this year and a lot of people are going to wish they had that next day off. In Italy they always do. That day is called San Stefano’s Day. It is like Boxing Day in the British Empire. But rather than being all about presents etc. in Umbria it is all about Tombola. Which is like Bingo. But it has more personality/legend/lore. Every number has a nickname and story to go with it. The Tombola games themselves are fun trip souvenirs, not to mention that they are a good way to motivate your self to learn Italian numbers and counting. And it is a pressure-packed learning device, as you have to be quick hearing the shouted out numbers, quick with yelling your numbers out and actually getting them right. Playing in a town-wide Tombola can be heart pounding exciting for a self conscious foreigner. Well, it was for me! But memorably fun too. If you find yourself in Italy over the holidays, ask around and chances are good there will be a game and it will surely be open to the public. That is what we did one year in Panicale. I played and I won . . . an Italian Hair Dryer. Now, if I only had enough hair to need said hair dryer. Sigh. Oh, well, the girls in the family were happy. And isn’t that what the holidays are supposed to be all about?

Where ever you are, enjoy the moment, enjoy being with who ever you are with and as always, we hope to . . . .

Another observation in this stream of holiday consciousness. It is about time. That most precious of commodities. Italians have more of it in this season. Generous with their time at all seasons of the year, our Italian friends often comment on how extra happy they are to see us Off Season so to speak. Many people in Italy have lives that are dependent in some ways on us for our tourist traffic and they have to “make hay while the sun shines” and harvest those euros while they may. But they are almost all somewhat more off-duty during these Holiday moments. They tell us how much they relish the chance to really sit and talk a moment, get that extra cup of coffee and just enjoy the moment with us “con calmo.” And of course that is a joy for us too knowing we aren’t distracting them from their livelihood.

Yes, Virginia, there is a possibility you’ll see snow for the holidays. Italy is fairly temperate, so it most likely won’t. But even the rare winter storm can have a shiny silver lining. In fact, some of my favorite memories were formed during winters in Panicale, years ago, when we lost power. We heated with our lovely wood burning stove, we have gas for cooking so we were still able to entertain by candle light. We relished the muffled silence on every side of us as we walked to the dimly glowing Masolino’s restaurant street. They were one of the few places that had a generator. Another time I remember pulling on boots and crunching our way thru the knee deep snow of an un-plowed road to a friend’s house on the edge of town. We popped prosecco corks and admired the most fanciful, tallest, gilded chocolate cake I’ve ever had the pleasure to see in person. Our friend had made it on commission for a fancy party which had been cancelled because all the roads were impassable. In the flickering candle light we marveled at the cake, then without further regard for its artistic merit, we sliced it, enjoyed it and toasted our friendships and congratulated ourselves on being stuck in such a fine place at such a fine time. Salute!

P.S. And if you do get to Italy and find yourself stuck in a snow storm, tune your ears for this expression because it will be being bandied about. You watch. Someone will push in through the door, stomp the snow off their boots and start to grouse about the weather only to be met with a smile and a shrug and a philosophical “Sotto le neve c’e pane.” Which is a very short way of saying Remember, that under the snow is bread. Meaning snow brings moisture which will help to grow the wheat that is going to feed us, so lets all be all zen about the snow already! In fairness, as Pollyanna as that sounds, the second half of the rhyme is “sotto l’aqua, c’e fame.” Meaning, yes, but too much water, ie: flood, means we’ll all go hungry, too. So, smiley face followed by frown face. My sense has been that Italians may all know the second half of the rhyme but I’ve rarely heard it used.