HOLIDAYS AND UMBRIA JAZZ. EVERY YEAR BETWEEN CHRISTMAS AND NEW YEARS. ORVIETO

Remember Y2K? That once in a millennium holiday we found ourselves very deliberately in Umbria. Our thinking ran along the lines of “if there is a meltdown, and we are going to be stranded somewhere for ever, lets spend that forever in Italy!”
And that was detailed in this story about Winter in Umbria.

Regular Umbria Jazz, by the way, is epic and it happens every summer in Perugia. We have been there many times and love it, but I honestly think the winter version in Orvieto may be the best. They call it Umbria Jazz Inverno. And jazz or not, it rocks. I’m not what I would describe as a music nut at all. But this is special. It is such a big event, so multifaceted and Orvieto is such a smaller town, its just all encompassing. The music is all around you and pours out of castle windows and covers you in the streets below. We never wanted to leave.

Most searched places this winter on Travel + Leisure site? 1. ITALY! Then Costa Rica, Paris and New Orleans. Just back from Italy, this week. was stellar. New Orleans a couple weeks ago. In Italy there had been lots of rain so the fields were just green green green. Some sort of winter crop? Can you believe these shots are from mid-February? I was there and was incredulous even in person.

Was only there in Italy two days. Saw a million things, ate most of them. Visited some towns I’d never seen before. Always something new to wonder at in Umbria. Even in the middle of winter.

Adopting a little Italian Ape (three wheeled mini-pickup based on a Vespa.) We went all the way to the far side of Ontario, Canada to get our motorized memory of all things Italian.

CASOLE VAL D’ELSA–Ape means bee in italian and you probably know it is pronounced ahh-pay. Other wise the headline here is really hanging by a thread. Wouldn’t be the first time, you say? If you saw the earlier blogs about Adopting a little Italian Ape (three wheeled mini-pickup based on a Vespa) you know we went all the way to the far side of Ontario, Canada to get our motorized memory of all things Italian. Just the sound of it takes me there and I’m tickled and surprised to see it every time I go to the barn. But Bad Monkey that it is, as soon as we got it home to Maine it immediately decided to test our love for it by pitching some kind of mechanical fit. So, it had to go to the time-out corner of Peter Brown’s Cumberland Avenue Garage and get totally taken apart, and then put back together. If you’d like to see and hear that distinctive buzz, check out Our Ape Road Test Video on You Tube. Its film debut/road testing/second home coming. First trip was 22 miles with snow in the air. We made it! 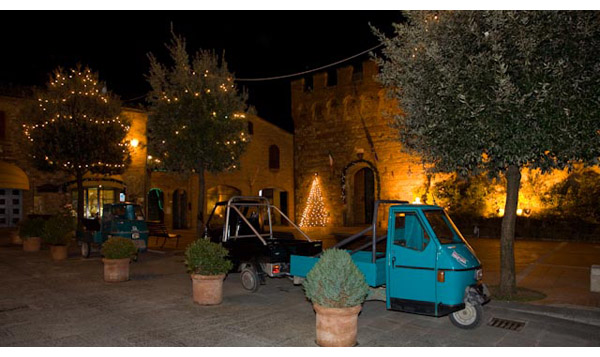 The photo here was just taken a few days ago in Casole Val d’Elsa by our friends at Avis Studio in Portsmouth, NH. Paul and Jane just got back from several weeks at Spannocchia the thousand acre, sustainable agri-cultural estate. It is in the heart of Tuscany, just outside Siena and we write about it often here. Can’t wait to hear all their stories.

Since last we spoke I have checked out several new properties and now I am checking out of Casa Vreeland too. Taking flight out of Rome this time but only because I will have a co-pilot and navigator. I am covered with new properties to describe in great detail and have an ocean of photos to sort as well. They really cover the waterfront from small 100 square meters (1,000 square feet plus or minus) attached homes with gardens to regal town houses fit for a duchess. Well, a duchess that does not mind having a few projects going on. Some assembly required as they say. But a great selection to work with. Stay tuned to this channel for more details. Going to have to really hold my feet to the fire to get them all up on the web site here right away. Starting the process Valentines Day.

In local weather, it is fine in Italy and we even saw a bit of melting of the snowcap here at the end of the trip. Maine on the other hand has been swallowed whole by one enormous snowbank my wife Midge tells me. How much snow I asked? “Oh I don’t know”she replied. “Three or four feet?” FEET? Yikes. Can not wait to see that. She closed our office early one day and completely closed it for the whole next day. All the schools were closed and even the ski mountain! It was more about the roads to the mountain than the mountain I am sure. OK, New York City in a week or so to visit family and check out Christo’s Gates. Then off to California for a couple big Spannocchia fund raisers in LA and San Francisco. And back to Italy at the end of April to see more properties and to see how our garden has weathered the winter.

Until next time, we will wave goodbye and say SIENA, TUSCANY, Italy— If we were not actually putting food in our mouths yesterday we were looking at ceramics to put food on or in. We did leave for Siena to be pretending to be cultured types heading for some of the many art shows in town. It turns out one of the best shows in town was after in Miccoli’s deli on your way to Il Campo or the Duomo as you come in to town from the Porto San Marco. This fine deli on Via di Citta is right near the Palazzo della Chigiana. It has a strange old 60’s bicycle outside all made of cane and bamboo. And a boar’s head wearing bifocals. Ok, Ok, that all sounds sufficiently corny when I write it down, but relax and enjoy the show. We did. We must have come at a slow time but we spent over an hour of high spirited fun here on a cold winter day. Never unintentionally eaten so much fine food in any one place. My travel companions were three serious cooks and food fanatics and this place just rocked them back on their heels.

We laughed and ate and ate some more and every few minutes with high comic timing that we never saw coming the owner, Antonio, would deadpan “Hai Fame? Are you Hungry?” even though he was feeding us non stop like Christmas Geese. And there before us would be yet another sample of wine or sausage or cookies or oh my gosh stop the madness. SHOT THE WRONG HAM FIRST
The store is packed to the rafters with delicacies and just prime photo ops every where glance. Not the least of which is Antonio with his awesome old world Van Dyke beard mustache combo that you rarely see outside Victorian tintypes. Anyway there are signs everywhere No Photos. So we didn’t. Our hands were too sticky with honey dripped over pecorino to really operate light machinery like a spy camera. And we saw why he says no. Dooofus older American tourist came in and bought next to nothing and said Photo Please. Antonio said no. And then relented and said OK. One. And picked up a big loaf of bread and posed with his arm around his plump happy Hai Fame amico and straight man. Meanwhile the tourist spends 10 minutes, I swear, posing one picture. Of the proscutti hanging from the ceiling. Moving customers out of the road. Telling us Americans he did not want any of us non-local people in his shot. THEN he asks to take a picture of the owner. No. Not now. He clearly shot the wrong ham first.

HAM HAM and more HAM
We then spent the rest of the post-deli portion of our day on a marvelous tour of our friends Tenuta Spannocchia just outside town. In fact from the time you leave the center of town headed towards San Marco to their farm you are constantly in Contrada Chiocciola. The Neighborhood of the Snail for all you Palio horserace fans. At the farm we saw them raising their fine black and white belted Sienese pigs (an old native breed nearly extinct 20 years ago). Then we callously watched some of their recently departed brethren being stuffed into sausages and being salted down for next year’s prosciutto.

Then, under a stuffed and mounted wild boar head we had wine sitting literally in a huge fireplace snuggled up to the fire. And then we sat down and ate prosciutto. Followed by porcini soup to die for. Which we followed with a perfect hot creamy polenta and then SURPRISE, roast pork. This time in the form of some of Spannocchia’s cinghiale wild boar. The tenuta (Italian for estate) is a stupendous 1,200 hilltop acres. It is a non profit, self sustaining farm. They heat with their own wood in high tech wonder furnaces, they grow their own chestnut beams and rescue ancient breeds of farm animals and crops while preserving the old Mezzadria sharecropping lifestyle that was in place here for 800 or so years until after the last war. We have been coming here for 15 years and it just keeps getting better. It is an ocean of work and I could not respect them more for what they do. The fact that their organic food is all marvelous is just gravy!

By the way, it was actually fairly ok that we were “pigging out” on this particular day as it was the very last day, Tuesday, of Carnivale (carne va le meat go away get it?) Mardi Gras indeed.

UNDER RADAR UNDER WEATHER
Italy is still locked in a freak cold and now I have managed to get a bit of a cold too. I am presently using that excuse to stay low for the day, make soup and sit by the fire. By the fire in my new woodstove. Everyone who is tired sick and tired of hearing about it please raise your hand. Ok, only one more: it takes place upon arriving home last night at midnight after Our Day of Pork. I came home to an empty house but with a fire glowing in the stove. Bruno could not bring him self to trust me with the bigger wood until the stove was properly broken in but earlier that night he evidently brought in some of the big stuff and lit off a good one. A wonderful warm Welcome Home. I know, after all the exotic food yesterday how how how could I stoop to a Bag O’Soup? Was it the catchy, ironic homage to Dean Martin: That’s Amore? Hmm. Maybe that factored in but the main thing is that this is a seriously good soup. Frozen soup in a bag. Yes, true. Just add water and in ten minutes you can serve this to company. Fair warning, I do.