The Holidays and All that Jazz 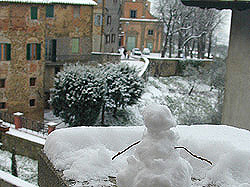 We’ve been in Italy in every season of the year and we like them all – even winter. It’s quieter, probably because there are fewer of us noisy Americans around. And there are all the fine classics you would expect in this most Catholic of all countries: like midnight Mass in the churches. At the millennium there were three priests officiating in our tiny town. And, yes we all got a glow-in-the-dark, plastic baby Jesus to take home with us, as a souvenir.

But, these days, Santa Claus has even started to raise his shaggy bearded head in Umbria. One December, as soon as we arrived in town, the village barista, Aldo, motioned me behind the bar for a whispered conference about the big guy in the red suit. It seemed that if I would bring a wrapped present to the bar for our daughter, it could find its way to Santa’s sleigh with the other village children’s presents. At the appointed time they all happily gathered around the fountain in the piazza to wait for his arrival. When we could just begin to hear Santa’s sleigh bells coming down one of the narrow stone streets, it started snowing. Are we in a Jimmy Stewart movie here? Our daughter was a cool and sophisticated, typically worldly eight or nine year old but her jaw dropped wide open and her eyes got “this big” when in the midst of the presents for all the good little Cesarini’s and Barbabianca’s her strangely foreign name was called out. She can tell you today, several years later, what was in that package!

The weather can be cool in December. How cool you ask? Well we have seen the odd sight of Umbrian palm trees sagging under the weight of several inches of snow. That isn’t normal or, I assume, there wouldn’t be palm trees here in the first place. As strange as that first snow in “sunny Italy was to us, it was no stranger than the population’s general response to the novelty of snow. Fur lined muckluks, giant parkas, multi colored hats with earflaps, heavy scarves and assorted ski lodge wear springs out of closets and soon it looks like a lost colony of Laplanders has taken over the town. The streets may be mildly messy for a couple days but lets just say Frosty the Snowman has a very short lifespan here. In the meantime, it is a great source of conversation around the bar. Allowing for the shortness of the actual winter season, and in much the same way as we say “April Showers Bring May Flowers” Umbrians nod sagely and say “Sotto la Neve c’e Pane”. There really is bread under the snow, because the snow is watering the ground that will soon produce the wheat that makes the bread. I like that. The weather is a wild card, you really can’t tell someone what to wear; because even though we’ve seen snow bending those palm in December, we’ve also had lunch in shirt sleeves on the sunny side of Il Campo in Siena. Isn’t this where travel articles advise wearing layers?
If you need any one, single reason to grab your credit card and get plane tickets to Italy in the winter – feel free to use Umbria Jazz Inverno. It is truly worth the trip itself. Tourists don’t have to be in Umbria long before they start hearing about the original Umbria Jazz. It is a long running hit of the summer season in Perugia. 10 days every summer and it too is worth the price of a plane ticket. I’ve been to the summer edition twice and the winter one once, so far and hope to go to many more.

If you miss the summer jazz classic, fear not, there is always a winter one coming right up. And vice versa. The thinking seems to be that if one Umbria Jazz Festival is good, two is better. And it is. First of all, the winter version is held in Orvieto and Orvieto, like Perugia, is on our “A List” of not-well-known-but-not-to-be-missed cities of Italy. Forget Rome, forget Venice. Remember Perugia, and remember Orvieto. Especially during Umbria Jazz Inverno. They actually had one for a few years, late summer in Cortona. Until someone figured out, uh, that Umbria Jazz wasn’t in Umbria.
But back to the winter fun in Orvieto. This is a vivacious, elegant hilltop town dominated by a big striped marble cathedral with world renown, newly restored Signorellis covering its walls. Even though I went to art school, I’m definitely not the kind of tourist that has to see inside every last cold, dark church on the Italian peninsula. Having said that, I have to admit the Signorellis are super and people rightly come great distances to see them. The town is also endlessly appealing. Its streets are lined with intimate stores of local crafts, fine papers, iron and ceramics. There are good restaurants, and friendly, engaging people that strangely haven’t yet suffered tourist burn out. We find it a pleasant day trip, at any time of the year.
Even so, I might not have thought of going there on an overcast day between Christmas and New Years, but I had had such good experiences with the summer version of Umbria Jazz, I thought “perche no?” and went off with our 25 year old son. Zak lives for music, writes it, plays it, enjoys it, and like me, he has no particular “Jazz Obsession,” but he was willing to give this winter festival a try. Hours later, I had to drag both of us kicking and pouting out of there. We had turned off our telefoninis during the concerts we went to and were in world of trouble when we got hooked back up with the rest of our party. The welcome we got at home was as cold as our dinner, but it was worth it. It was a life altering experience. I could not believe how much fun we had. We had no tickets in our hands, we just showed up on Orvieto’s doorstep and said “we’re here!” And then we proceeded to go to whatever concerts were available when we were! They rocked our new holiday socks off, if you can say that about Jazz. We saw an American quartet “Turtle Creek something” that I feel like I have since seen written up in various places. They were awesome. And so was the venue they played in – a big stone ex cathedral or castle or civic meeting room, it appeared. I remember that it was warm inside, the stones glowed, lit by hyper modern, state of the art, ultra chic Italian lighting, the acoustics were excellent, the seats plush, the setting intimate – 200 people? The next concert we fell into started right after the first one and was only a couple palazzos away. What could be easier? It was an Italian jazz combo I hadn’t heard of before. I wish I could remember their name, because they brought tears to my eyes. They totally took me away, to another, higher place and I was glad to have been there.

Just being on the streets of the city was a rush with big, bright brass sounds blasting out of one palazzo and mingling with blues wafting out of the building across the street. And the streets! The scene was unforgettable. One of that year’s hits was a big southern gospel group and there must have been 50 elegant black ladies in high heels, full length furs, pearls and wonderful, high, swept up, formal hairdos, all coming together from different corners of the town to get to their next performance. Oh, the streets were just a swarming. Musicians between acts, instruments under their arms, the music echoing off the tall stone walls and polished pavements of the busy, narrow streets, the smells of cooking drifting through the opening and closing restaurant doors … could we have fallen into a more exciting winter day? I could not recommend it more. It’s usually between Christmas and New Years, but check whole schedule on the web: www.umbriajazz.com. Since we did so well the last time, I wouldn’t stress about the tickets. But, that’s just me. Maybe we were naïve and lucky. If you do get tickets in advance, great. If not, do what we did and try just showing up. Even if you didn’t get into a single concert, it will be safe to bet your day in Orvieto will beat the heck out of whatever is on Italian TV at that time! Happy Holidays in Umbria!