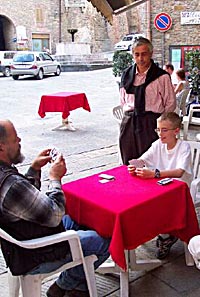 (Scopa means broom or sweep in Italian. The object of the game is to sweep, or clean, the table of cards)

Just a few words about cards that are important, specifically to this Italian card game of Scopa.

In left to right order of the cards below they are: Sette Bello. Pretty Seven. The seven of money. Everyone wants this. The top card in the deck. Worth seven.

Next is the ‘Fante of Coppe. Fante means soldier(infantry), but it is also like infante (infant, kid) so I always spell it ‘fante. Could be just me. N.B. nota bene. Pay attention well here. He is standing, but has NO crown. Worth eight.

Then we have Cavallo (horse) or he can be called Cavaliere (knight, cavalier) of Spades. He’s easiest to spot of the “vestiti” what with the horse and all. Worth nine.

Finally, da king. In this case, the king of clubs. NB pointy hat! If it has a crown on its head its worth 10 when you are counting

NOTE: these cards are all the classic "Napoletanne" (ie: from Naples) cards. There are regional versions that are different in every part of Italy. The cards may look different, but they are equal when it comes to playing the various games. In some regions the fante may be a femail figure and be called "Donna". Still worth eight points whether called fante or donna.

SCORING. THIS IS THE CRAZY PART. BUT, FUN. SEEMS TOTALLY BIZZARE AT FIRST AND STRANGELY NATURAL SHORTLY THEREAFTER.

Someone must get a point in a hand if nothing other than from sette bello. This is the only guaranteed point in
the game. All the others can result in Pari (tie). Since there is only one sette bello someone gets something.
Scores can get going pretty good if the scopas start falling into play.

Ok, play to some pre-agreed upon number of points and enjoy.

IN BOCCA AL LUPO! In the wolf’s mouth is how they say Good Luck!

REGIONAL VARIATIONS Jan 20, 2001: Playing with our friend Anna from Vicenza we noted how very different
her Veneto (region around Venice) cards look. Tall and skinny and totally different. All the cards I’ve seen in Italy
are “Dal Negro” brand from Treviso a couple miles from her town. Veneto cards are
very twisted and hard to tell Clubs from Spades. They have one card the fante
di spade (8pt card) that they affectionately refer to as “la veccia” the old lady. No points or anything but gets
mentioned everytime it comes up.

RE BELLO. They also give a point for the “pretty king” the king of money.

SCOPA CON ASSO MANGIA TUTTO. OK, this is fun too. Never seen or heard of this. She plays Scopa and she also plays
this variation as sort of a second version “Scopa with aces eating everything” In this variant, if you have an ace
in your hand, you can clean the board with that ace. No scopa points but you can get a boat load of fancy points and
then the person next to you has to put down a card and your partner has a fine chance to actually scopa. Fun twist. There is also a game popular with very young people called ASSO PIGLIZ TUTTO.