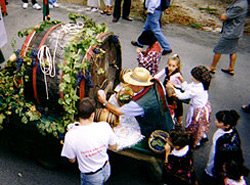 Our first Grape Festival (Festa del Uva) came as a complete surprise to us. We weren’t in Panicale, high above Lake Trasimeno for the festival. Wasn’t on our radar screen at all. We were there for the luscious September weather – the best weather of the year as far I am concerned. When the festival showed up all around us, that was just icing on an already fine cake. The first thing we learned was that the parade does start on time. But it is Italian Time. Whenever. Half the fun is the milling around and getting lined up for the parade. And, it is easier to photograph things when they are holding still. In Panicale, for the parade anyway, it is good to remember that what goes around – goes around. Panicale’s parade with floats, historically costumed troupes, jugglers, jesters and bands takes one lap around the tiny town and when you have just about recovered from the fun of it, here it comes again. And why not? A circle of this town’s outer walls is a pretty short trip, even by tractor-powered parade float.

Like an onion, our hilltop town is round and has many layers. And so does the parade, at least the floats. They start their first lap with one message, puns, word play, gioci di paroli and somehow subtly or not so subtly morph into something stranger or sometimes even demurely risque for the second lap. Some of the wine has surely kicked in by that time. The first year it kind of went by me a bit, almost denting my consciousness, but not quite.

Now, maybe my Italian is better and I actually read some of the things written on the floats and local friends explain the funny double meanings of puns made on idomatic expressions. One this year was Sbronzi di Riacce. Famous Greek sculptures (Bronzi di Riacce) naturally in bronze, were pulled from the sea a few years ago have now become, with one letter changed, the toga clad “Drunks of Riacce”. I got that one myself but some of them were much more intricate.

One year, I forget what the words on its banner were but a float featured a huge Roman goddess of nature and a wild boar. That was on the first lap of the parade. On the second lap, it was more of a drunk lady and her pet pig … oh, don’t even ask. That was the year we watched the parade pass below us where we sat 10 feet high above the street on a stone garden wall. And still got soaked head to foot in red, red wine! One of the roaming wine servers with a handy hand pump, decided we looked thirsty up there.

I did mention this is more about being a wine festival than a grape festival? Yes, there are grapes and vines stapled up along the stone walls of the towns streets, and it is named Festa del’uva (of the grape), but wine rules. And it is required that it be freely dispensed from every float in the parade.

Is this a great country or what? There are very many happy people but, no one is falling down and never a hint of anyone acting surly, weird or even tipsy. It just isn’t socially acceptable. And wine is so very much the tap water of Italy that it is no big, lets-get-crazy deal to have a glass of it in hand. One year we did see one RipVanWinkle wannabe folded up under a tree late at night, after the parade, but friends came along and quietly took her away.

That was the year we had American friends with us and were scared to death the festival wouldn’t live up to our advance billing. We had even convinced them to skip a weekend at Lake Como or something more traditional and A List. If the full body wine bath didn’t get their attention, the round-the-clock level of activity did. Craft stores spring up behind doors we never see open the rest of the year. Some of the spaces are quite elegant galleries, some are hastily swept out storage cantinas that probably had farm equipment in them the day before. Wine, olive oil, carving, weaving, paintings, pottery on and on being sold by talented local people. All fun and open til midnight it seems. Multiple concerts outdoors going on at the same time under the starry Umbrian sky. Funk for college kids, rock/waltzes for adults and dancing and prizes til late late.

This year we started asking for the dates of the festival months in advance and the answer was always “well, either the weekend of the 17th or the weekend of the 25th”. Hmm. As time grew closer and finally passed for getting airline tickets – the date was still in limbo. The powers that be decided not to decide and did the whole event for both weekends! We had given up and just made sure we were all on the ground for all possible weekends and got both! Life is good.

Panicale (pah nee call lay). During the festa should it be renamed Panic Alley? For such a small town (400 people? 700? depends who you ask) it has an amazing social life. All out of scale with its size. Throughout the year there are concerts, plays, art exhibits and performances in the theaters and churches. Music and the occasional soccer victory pig roast in the piazza, – but when festa time is bundled in – look out. Town dinners? – Yes, yes, yes, yes. There were four of these Cene Sociale during the festival this year. My only bits of advice: a. don’t eat for a week before going, and b. get reservations early. They sell out and you roll out, stuffed to the gills. Last year’s dinner was our only exposure to someone’s (I know now, but I’m not giving away the source of my private stash) homemade pink pomegranite grappa served Vodka-like from an iced bottled. That year’s hit was the all-seafood dinner, with perch grilled on a wood fire that you walk by on the way to your table. The décor was great in the communal canvas roofed outdoor party room. We sat under the town’s projected street repairs for 2003 and tried to figure out if our street was on the list. I think it is! That’s great but have you tried the seafood salad! More wine over here, please!

And parades? That’s plural. If one was good, two could be better. One by day and one by night. Un Sfilata Noturna and a normal late afternoon one a week later. There was a lot of buzz around town before hand about the night time parade. This was a totally new break with tradition. Two parades, two laps each. They both worked out swell. It was a near thing on the second one. It started to rain as the day time parade was about to start. No Problemo. They waited. When it quit raining – the parade started. What could be more logical?

One of my favorite things about the festival, or at least the parade, is its rampant paganism. It feels like the spirit of the festival has been in place since someone in the distant past figured out old grape juice is a lot more fun than new grape juice.

In New England we have county fairs, clam festival parades with Shriners in go-carts and Jr high marching bands and fire engines, and we have puritanical old Thanksgiving but a town wide enforced wine tasting party? Not that I’ve noticed. This festival of the grape manages to be ribald and sweet all at the same time. An example in this year’s parade was the giant rocket ship piloted by the handsome, young, iceblue-eyed village plumber, Marco, with his face painted silver to match the rocket and his jumpsuit. One of the big, long haired, tattooed village Vikings (we call him Eric the Great-his family is Danish, but they live here) pilots an escape pod. His naturally white blond hair is dyed green for the occasion. Also outrigger from the mother ship were dozens of the town’s daughters in black leotards, silver armor and masks and best of all silver metal breasts dispensing wine into the mouths of any who would hold still for it and some who wouldn’t. They could get distance if they needed to. They were encouraging people along the parade route to come up and get a mouthful. And just as often mothers would be hawking their daughters’ cleavage/beverage concession and then decorously wipe their shiny metal breasts with a clean towel between customers. We are so, so not in Kansas anymore. A friend’s son, a nice young Englishman was a ringleader of this group and waxed poetic (much, much later over a glass of, yes, wine at the bar) about the challenges and technical difficulties overcome in the
engineering of this fine wine delivery system. Ah, to be young! And in Italy.

What a fine festa. There was dancing, concerts, visits with friends, drinks in the garden watching the sun go down over the lake, fireworks after midnight, oh, my.

Life is a Carnival when you’re in Panicale in September. It is wild and wonderful but totally under control. There are smiling faces everywhere you glance. But there is backup in the form of the local Carabinieri in spit and polish uniforms looking magisterial and unswayed by any of the craziness swirling around them. And swirl it does. You can maybe sense that from attached pictures. I can’t wait to see what happens in next year’s version.