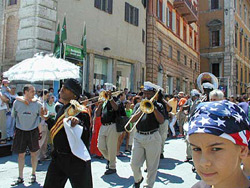 I first went to the Umbria Jazz Festival the summer I was attending the Universita’ per Stranieri in Perugia. Studying Italian language and Culture. I was living in the center of town and when I say “went to ” the festival, I mean we more or less “moved to” the festival for 10 days. It just got progressively harder and harder to find my way to my classroom with each passing morning. Several of us bought packages “all access” tickets and night after night saw one fine concert after another. The series we saw were all under the stars in a big soccer stadium at the edge of the old part of town. And, speaking of stars, they weren’t just in the night sky. We saw Miles Davis, Sting, Gil Evans, Cab Calloway, Bradford Marsallis and Manhattan Transfer, to name a few. Masses of us from the school and our young funny professoressa Gabriella would meet up in the piazza, take food and blankets to the stadium where we would camp out on the grass, mid afternoon, hours before concert time. We had to defend our turf from late arrivals. We would “fare una pic-nic”, play Scopa and work on our tans until the late summer sun set. After the concerto del giorno, we’d repair to Corso Vannucci and have giant multi-flavored gelatis (my favorite that year was “frutti del bosco” with three colors of wild berries of the forest on three kinds of Italian gelato) and watch the sea of modern Etruscans languidly promenade past us. I really don’t know what time of morning the activity officially shuts down but I should say there are a selection of concerts to choose from that start after midnight – every single night of the week. Yes, that means Mondays. One year, I had a hotel in the center of Festival and I can attest it wasn’t over at 4 am. It was for me, I was
well tucked in long before that, but I happened to get up not long before dawn and there were still vendors with crafts spread out on blankets for sale and people going by beneath my window.

The Summer Festival theme that year was “back to the roots of Jazz”. Rather than having internationally known
jazz/crossover/contempory rock/big name groups they went to pure, original All-American Jazz and focused on groups with the Louisiana and New Orleans sound. A cynic might have said that had something to do with the corporate sponsors of that year’s event. And who knows? But this year, in addition to Alfa and Heineken one of the sponsors was the State of Louisiana. Much to the confusion of the Italians they were being offered things like “dirty beans and rice”, jumbalya, watermelon and grits with their Heinekens! My wife Midge is from Louisiana so that was fun for us and something totally different for the pasta loving local partygoers. And party it was!

I should point out that I have no music background, I have exactly zero Jazz CDs, no walls of classic vinyl or framed Dizzy Gillespie posters. Totally clueless. But I do know a good time when I see it and hear it – and Umbria Jazz is all that.

There were concerts at multiple locations that we could pay for; and if you were a died in the wool blues fan, like our daughter, Wiley you could do as she did and pay for seeing groups like the Jazz All Stars. According to her, these were super legends playing together one time only and she was over the moon at the idea of seeing them together in person. It was actually sold out, (putting dad deeply in the dog house) but we went to the venue at show time, where I scrawled “vorrei un biglietto” on a piece of paper and we had a ticket as soon as I held that sign up. . The rest of us opted to stay outdoors watching the more or less continuous and totally free, open-to-the-public shows. We could follow a classic New Orleans Brass Band as they sauntered, with parasols and tubas, up and down the main street. Or we could wander into a rocking zydeco concert or see a crazy “let’s take off our shirts and wave them over our heads and snake dance through the crowd” gospel group in the park. We could look out over the stone banister running around that park and see most of southern Umbria, listen to the music awhile and wander right back out to wide Corso Vannucci. Just as we were getting out of the range of a group in the park we would start to hear big band sounds or swing coming from the other end of the main street, up by the steps of the cathedral. And never fear, there was shopping to be had everywhere in between, all along wide, chic, pedestrians-only Corso Vannucci. And I was glad to see Perugians still have gelati to kill for up and down the street. Choices, choices, choices. They can definitely make your personal ice cream dreams come true.

When we left Perugia that night at midnight, after 12 hours of fun, crowds were still pouring INTO the scene. Very nice crowd. Very large numbers of people, lots of wine and beer being sold, but the crowds were as tame as a church social in Conrad, Iowa.

Our teenage daughters had both heard me rave about the festival most of their lives and in Perugia they both said loudly, several times “why haven’t we been to Umbria Jazz before, this town rocks!”. We’re parents, so we’re still not cool … but for a moment there, we probably came as close as we’re going to get. Thank you Perugia, you’ve been wonderful! We’ll be here all week!

Go to: http://www.umbriajazz.com for this year’s details.