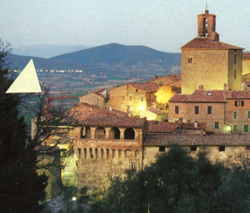 But the real cry for help was probably the time I went for the Italian Momma Of All Renovation Projects: a big, scary, abandoned
house – way over on the other side of the ocean. A house that wobbled up and over neighboring apartments, on a steep and narrow
street, in a tiny town in Umbria.

Italy? Umbria? What? Renovating here wasn’t hard enough? Even in the US, I don’t claim to understand more than 70% of what
contractors are saying. In Italy, they speak Contractor, but they do it in Italian. Factor in Degree of Difficulty or Style Points
for not being 100% fluent in either of those languages, and you begin to see the thrill that this kind of house could have for the
truly addicted. This was it. A reno junkie’s dream house. 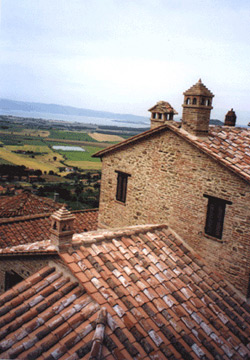 EXACTLY, HOW ABANDONED ARE WE TALKING ABOUT?

Abandoned enough. Abandoned before heat and electricity were considered chic. And one other thing this place didn’t come
with – bathrooms! So, you tell me … if this house was built hundreds of years ago where did people "go to the
bathroom" all those years? No, wait, don’t tell me.

Although the last human tenants had checked out generations ago, (leaving dishes in the sink and mattresses on the beds, I might add) we still had squatters of the furred and feathered variety. This was the flop house of the animal world. Feral cats got in on the ground floor here. And stayed to raise families. Pigeons did the same on the upper floors. Pigeon nests, pigeon eggs, pigeon poop, baby pigeons, teenage pigeons, old retired pigeons, dead pigeons. We had them all. The first time we tip-toed up to the dark, spooky top floor, one of the pigeons whirred right by us and out a window taking with it one of the few remaining panes of glass in the building. In a couple of heartbeats we could hear it hit the street below.

The good news was that the view out that window went on forever – taking in an Umbrian lake and half of Tuscany. Breezing by
the facts that, 1) the stairs were on the outside of the building, 2) that some of the floors had caved in and that, 3) you could see
daylight through the walls in places that weren’t even windows, somehow, in spite of all that, we were being pulled to the house
like little pieces of metal to a magnet. 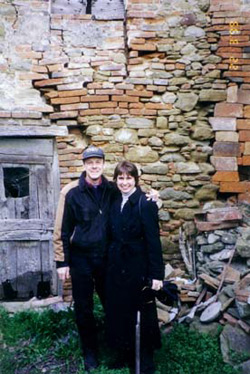 BLAME IT ON KIKI

But we weren’t even looking for a house. Honest. We’re not talking about picking up the National Enquirer while we’re killing
time in the check out lane at Shop’n Save. This was more like going to Italy on vacation and coming home with an actual house
instead of one of those nifty ashtrays in the shape of the Coliseum. How could we let this happen?

I’ve found that in renovating, as in real life, "when in doubt, blame someone else.” We blame Kiki for the whole
house-in-Italy-thing. She came to visit us while we were minding our own business on a long anniversary trip in Umbria. She had never
set foot in Italy in her life, yet six days later she was pestering my wife and me about this falling down house with its tattered
green "Si Vende" sign thumbtacked to a window. She made me call for an appointment by saying the words I’ll never forget; "I’d pay for part of it.” That must just prove how very weak we are because that is all it took. We quickly guessed the house was big enough to be made into two apartments. I made the call.

That’s when we met our contractor/broker. Word to the wise, if you don’t truly love your local Italian contractor and/or broker, don’t buy that fixer-upper from him – because he’s about to become your new best friend for the next several years. That’s just how it is often done in Italy today. Check out some houses that he’s renovated, talk to people who know the contractor’s work and think about it overnight. We know now that we had beginner’s luck. Although it may not have seemed like a magic moment when we first met in the pounding rain, typically late – dachshund on one arm and a pretty, died-blond, gum-snapping wife on the other. Enigmatic. Mysterious. Taciturn. Miracle Worker. All of the above. All I know is that he has saved us from ourselves a hundred times. And our adopted town seems to be ok with him too because he took an embarrassing pile of rubble in the center of town and turned it into something of a Kodak moment. 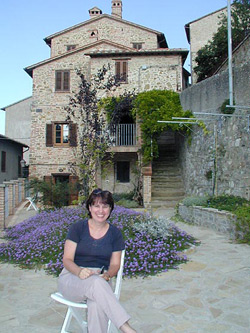 He and his crews kept their noses so close to the grindstone that people in town often took us aside to intimate they weren’t so sure these guys really were fellow Italians. They kept saying, “who ARE these guys?”

BUILDING A HOUSE BY BLIND FAITH AND FAX MACHINE.

At this point, we’ve used the house to rationalize many “inspection” trips to Italy. "Sorry, gotta go now. Got to go check on the house. Again!" And, it was true, I’ve done dining table sized models of the house and dozens, if not zillions, of annoying diagrams for the contractor to follow, but he still had to make a lot of day to day decisions on the ground, by himself.
For other decisions we went back and forth on our trusty fax machines.

It certainly helped that he spoke English. And, that I spoke enough Italian to have meaningful discussions (well, they seemed meaningful to me) with the plumbers, electricians, town engineers and such. Most days I’d have to say the whole arrangement worked like a charm. But, there have been days I would have given anything to have been there in person. Like the day they cut down the massive, picture-perfect fig tree at the end of the garden and sent me a stack of photos documenting the whole process. What the heck was that about?

(Tree hugging nature update here: I have since discovered why the kind, gentle, plant loving Umbrians more or less shrugged at my evident pain here. You evidently can’t kill fig trees. They took the bloody stump of the fallen fig and propped it upright and stomped the dirt down around it and went on with their business. Two years later it is as big as a house again and we spend considerable time every year cutting it back and slowing down its enthusiastic growth and tearing out its many new shoots.)

They say Rome wasn’t built in a day. It turns out houses in this part of Umbria aren’t, either. We’ve determined that patience (and/or being easily amused by the smallest sign of progress) helps a lot in any renovation. Maybe even more so when you are renovating a five story house with two foot thick stone walls. In our particular case, it took us three years from the time we were gingerly picking our way through the pigeon guano till that long awaited April when we spent our first night in our totally naked house. (Spanking clean and new, and surrealistically stark in a way post modernist sort of way, we had newly delivered mattresses on the floor, but we didn’t have as much as a chair or a plastic drinking glass in the house. The adventure had officially entered another phase.) 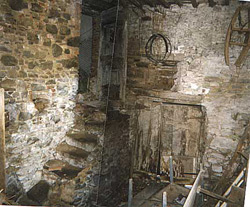 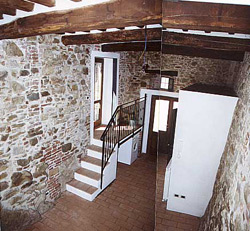 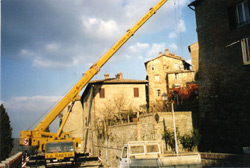 Here’s how we passed the time during the purchase and renovation of our dream house in Italy: For the first year, we sent fax after fax filled with inane questions, complicated diagrams and proposals leading up to the day we bought the house. The second year was pretty quiet. This was a few years ago, so we were lucky enough to spent our time watching the lira/dollar ratio improve almost daily and wishing we had bought the house "now" instead of "then." During that time, the contractor was getting the required metric ton of Italian permits and waiting for his favorite builders and masons to become available. OK so, no progress, but no bills either. It gave our checking account a chance to quit making that gasping noise. At least for one year. How much was the renovation? They say a typical, top to bottom, Italian renovation will often cost twice as much as the initial price of the house. And "they" were right. So, abandoned house price, times three, equals livable house price. If that thought doesn’t snap some of the stars out of your eyes when you are gazing at those listings in a realtor’s window – nothing will. Another formula advanced when we were doing our renovation was that a total ground up renovation could average 1,000 euro per square meter. 1 Square meter equals 10.7639 Square feet, fyi! That was in 2000. In 2005, that number is usually calculated at 1,200 – 1,500 euros per square meter. 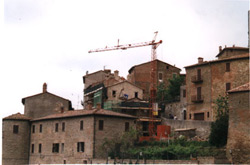 These two sites together can give you an idea of how that works out in dollars or pounds per square foot in today’s market.
http://www.oanda.com/convert/classic &
http://www.sciencemadesimple.net/conversions.htm

The last year of our schedule was the only year there was really any heavy lifting. But once the great big, honking crane was planted firmly in the garden, it became a veritable beehive of activity – with three or four people, pretty much all day everyday, for the whole year. To our way of thinking this time line wasn’t too bad considering the house was huge and tall and made of stone and on a tiny, tiny steep street inside the town walls. And considering how much work the house needed. When we started, we didn’t have anything – now, we’re living like people. We’ve got dishwashers, and showers with hot water pouring out of them, ISDN lines in the walls and a satellite on the roof. Heck, we’ve even got a roof.

The money (we kept telling each other, “it’s only lira”). The waiting. The dirt. They’re all old news because it’s over. We’re in. We’ve slept there, and we’ve even eaten there.

For our historic first, non-picnic, meal in the house, we asked our neighbor Nico if we could borrow a pan. He is an architect and an artist, and unfortunately for him – we knew where he was at the time. The time was almost 8 o’clock at night, and he was outside sketching in the dirt with a long stick. Sketching a plan for the new garden. Typical Umbrian, he loaned us an armload of pans with himself on the business end of them, and in half an hour he was cooking tagliatelli and making a sauce of porcini mushrooms that he had personally hunted up in the nearby woods. 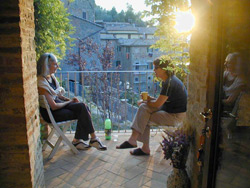 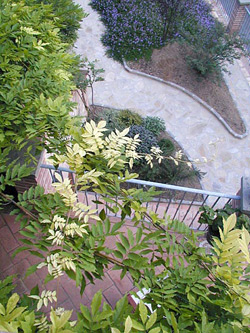 Sitting at the table, several hours and several glasses of red wine later, Nico looked out an open window at the lights below and then looked back around and said "You know, some friends from Milan asked me to go through this house when it was first for sale and tell them what I thought of it." Pausing a second for dramatic effect, he said, "I told them ‘Forget about it,’ I said it was impossible.” Raising his glass, he said, “I can’t believe we are sitting here having this fine evening."

But would I do it again? Who really knows. We’re a bit unpredictable in real estate. But looking back on it from a 2007 perspective? I think I would just buy one that is ready to move into and enjoy.