PANICALE, Umbria, Italy–Yes, we are here. I think.

Bit dazed and dislocated from the typical overnight flight. And so happy to find out we’re not only here, but we’re wired. Was just iChatting and IM’ing with our office in the states. Airport/wireless thing continues to amaze as we walk in and fire it up and the messages they do pour in. Tiny glitch this time. Our friend Elida that came to visit from Panicale recently said she had checked our house for us and our broadband didn’t work. So I came in the living room a bit on tiptoes, edging up to our snakepile of wires and devises. And I could see there were loose wires. But. What goes where? Uuuugggh. Not a big thing for say, the proto typical fifth grader, but for old dog, this is a new trick. No earthly idea what any of it could be doing as it sits there sullenly hmmming to itself and flashing its many tiny green eyes. I can only do my few computer oriented things by rote. But I can take digi photos. And do. And I found the photos I’d taken of the hookup tech genius Maurizio did in 2006, and put everything EXACTLY as per those photos and bingo! his system still worked and messages started pouring in. Highly recommend that method of cheating for the low tech among us.

And our poor un-used Italian cell phone. Been languishing about lost and useless in my sock drawer since last June. Almost forgot to bring it. Charged it up and we were back in the game without missing a beat. How does that even work?

WE FLY, FERRARIS FLY AND TIME ON VACATION REALLY FLYS

Easiest best flight ever. Boston to Rome no changes, nowhere. Ugly food on ALITALIA but the many post touchdown coffees along the autostrada (so few miles per gallon of cappucchino) were even better than I remembered. I can still remember the first time I ever braved my way into one of those Agip “Autogrill” cafes and tried to figure how the heck to order anything. Decades later, it almost makes a modicum of sense or we’ve just quit thinking about it in the American part of our brain. Hmmm good. Cooooffffee. It is slowly dawning on me: WE MUST BE IN ITALY. When out of the blue this thought occurred to my barely awake self: WAS THAT A FERARRI? Cars passing us, trucks, trucks, trucks passing us. Voomm, voomm, vooom, they all sound alike. Except for that SNNAP, SNARL, GRRReat sounding silver coupe. Yike. What a voice. We sooo heard it before we saw it. And then we saw it no more. Solid gone.

We actually landed early due to big old tail winds and were in Panicale before noon and off to the races. Cool temps here but all is lush green and everything is in full flower. Which is good. Earlier they were complaining drought almost. Seems good now. Cherry trees, wisteria, lilacs, iris, stuff I don’t know what is, etc. 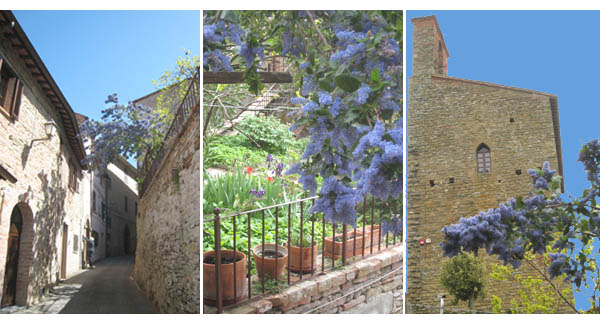 Our garden has had a major prune/whack. How did that happen? And all the shutters have been redone. I mean I can guess which good friend did it but wow. Took the bulk of the old fig out. The main trunk is gone, stump about 10 inches across. Bruno and I had talked about taking that out and letting the good big side shoot that are major tree like items themselves, let them take over. Everything in the house is polished to within an inch of its life. So good to have good friends that will do this. I know we pay them for their work, but it is really so much better than I would ever expect that it really feels like there was a large helping of love mixed in with the work. Really an attitude fixer that is. I have to do (but want to and like to) do some heavy weeding but even the remaining weeds aren’t like disgusting or anything at all, I know they are weeds but when viewed from the street above, as most people see the garden, they are just green stuff. They even masquerade as fairly organized weeds. But their days are numbered.

Kind of an on-going shock to get here so relatively easy and to be so organized. Where ARE we?