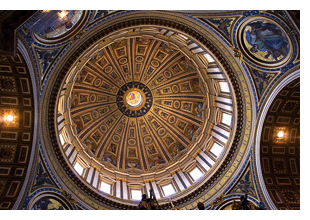 ROME, ITALY – This is an armchair tour of the Vatican churches, inside and out. Amazing 360 degree photos. More than 360, 360 all directions. Want to look straight down at the paving beneath you, straight up at the dome above, left, right? Anywhere. What I always wonder was where was the camera? How does that work? I’ve seen the effect of course but never such a regal documentation of one subject. And I can’t imagine how they set it up the lighting so well over and over. I know, forget the technology and just enjoy. It is better than being there in person. You just see everything.

And plus, even though Palm Sunday and Easter are almost upon us, no lines! Divertivi molto.

360 DEGREE WRAP AROUND PHOTOS INSIDE THE VATICAN