UMBRIA, TUSCANY, Italy— Be not afraid. Trains are no big thing at all in Italy. In fact, trains and training are a good thing. Look at these happy trainers. And why shouldn’t they be smiling. There are no Audis and Alfas bearing down on them. They can sit back and gossip, doze off, read their guide books, just be one with their inter tourist. The Italian trains have had a lot of of practice over the years and they almost run on time and they are a good value for the money. And the time saved over parking and driving as such makes them well worth the price and the effort. Being Italy, they do things how they do them there. Not always how we would do them in the perfect world where we ran everything. And we just need to get over it and adapt. The best part of the Italian train system is the Web site for Trenitalia Get it? Treni (trains) + Italia (Italy) = Trenitalia. Very nice contraction. Anyway, everyone in Italy takes the site as nearly gospel and refers to it constantly. It seems very dependable. Go to the English language section and it too is pretty bullet proof. Someone with English for a first language is vetting it and it seems to be entirely lucid at all times. Even for us foreigners! 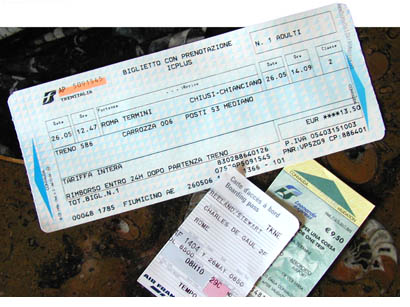 WE’VE GOT A TICKET TO RIDE
If you get a ticket for a specific time and date and it is in a cabin, just read the ticket carefully and you will see a train car and cabin and seat number. In the example shown here, to get back to our house in Umbria I was going from Rome to Chiusi on May 26th, leaving at 2:09PM. 14.09 in Italian or military time parlance. With this particular ticket, I was on train 586, car 6, seat number 53, in the middle of three seats. It makes sense after awhile.

We generally don’t get cabins but just get a generic ticket to Rome. Trains leave for Rome more or less constantly and you can go whenever you want with the generic ticket. Tickets are good for a long time. 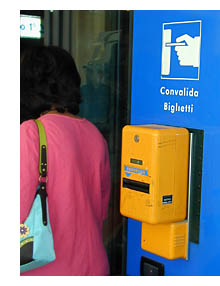 STAMP COLLECTING?
Here is the only tiny trick. Which I conveniently forget fifty percent of the time: stamp the ticket. Stew. Are you paying attention? Like I said, the ticket has a long shelf life, but because of that if you don’t stamp it and the conductor doesn’t check it, you could use it again. So, they want you to stamp it in one of the yellow boxes that are all over all the stations and the platforms too usually. Either end, just slide it in the slot and it will make a bit of click and there will be really faded almost out of ink impression that only conductors care about. Says the date and time you stamped it. Then, after this stamping, the clock is running and the ticket/biglietto is only good for a finite period of time. An hour? I do not recall. Something like that. Just stamp it before you get on and everyone goes away happy. I’ve seen Italians who “forget” to stamp their tickets get yelled at. Of course, they yell right back. The conductors usually figure silly foreigners are hardly worth the effort so we play the poor blissfully ignorant tourist depending upon the kindness of strangers in a strange land and they just sigh meaningfully at our boneheadedness and write Who knows what the heck on the back of my ticket and shove it back at us with a world weary sigh of what is that? Pity? Disgust? Oh, well. 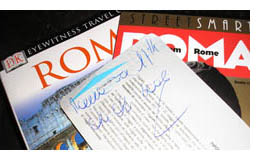 Do as I say. Not as I do. That seems to be the message here, doesn’t it?

See you on board,