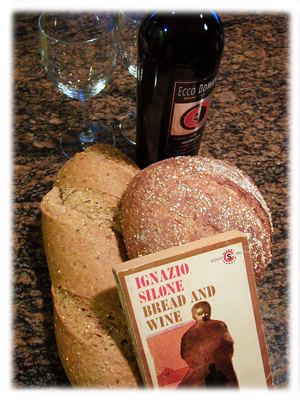 This is an interesting book, seventy years old but there are parts of it that seem to be talking about where we are today. A classic Italian story from WW2. By Ignazio Silone who was born Secondo Tranquilli but had to write under a pen name to keep out of the clutches of the Fascists. My copy is the 1962 re-edited version of the 1935 original. It is an anti war book in a sense, certainly a book that refuses to glorify or glamorize war. It shows the futility of blindly and illogically following the crowd whether politically, religiously, or any other way. Considering Silone himself was in exile for years and that the Fascists beat and tortured his brother to death, this was a calm, considered book. Maybe a bit bleak, but not totally hopeless. Close. But he made his points.

Here’s the general plot: The protagonist, Pietro Spina has lost his faith in religion and has become a sought after Communist fugitive. Like the author, he is in exile, but the main character of the book risks it all and comes back to work in the underground resistance. After almost dieing from the rigors of his clandestine re-entry into the country, Pietro hides in plain sight as Don Paulo Spada, a cranky priest recovering from a serious illness. I liked the Robbing Pietro to Pay Paulo first names he chose for his main character. And the last names too. The radical politician was a mere rose spine (Spina) while the small town priest was a more war-like sword (Spada). The book goes along in a complicated, what-the-heck-is-going-on vein for a while. To me anyway. And I will admit, I set it aside as preachy and political, several times. But yesterday, I read the last chapters and found it all came together in a well thought out way.

Here’s what motivated me to pick up the thread and follow it to the ending: I was working in the yard when our friend Gail stopped to invite us to dinner. She and Midge are directors of Spannocchia the non profit estate outside Siena. “It is just a We Love Italy Dinner” she said. “Pot luck”. I asked what we could bring. Knowing we’ve been a bit under the weather (all better now, thanks) she evidently took pity on us and gave us The Easy Out. “Bread” she said “and maybe wine”. I knew what she meant. But I also knew I had to finish the book. I had to bring her wine and bread and “Bread and Wine”.