Another thing we did not know was that the New York Times is not as easy to find as I expected. I think I could have found it easier in Gray, Maine or Panicale, Italy than in New York City’s financial district on a Saturday. 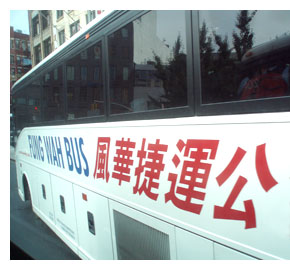 NYC, New York – Sure. Blame it on the kids. Why not. Our first choice on travel would likely be kids in Italy with us. Second choice quickly becomes kids or Italy. With one in New York City, one in London and one headed for college at our alma mater of Northwestern in Chicago, it shouldn’t be too surprising that we can’t get to Italy as often as we want. But we are equal opportunity when it comes to where we can enjoy each others’ company. Can’t be in the place you love, love the place you’re in?

So, look out NYC. We found a holiday on the calendar and took the Fung Wah Chinese bus to see son Zak. Are we having Fung Wah yet? I don’t know. These buses are half the price of say, Grayhound, so if you are going Boston/New York, it is a good value. But we’re spoiled bus brats. The only truly good bus is the Concord Trailways paradise-on-wheels bus. We take those Maine to Boston constantly. Anything else cannot compare. So we pout a bit on anything else. Please Concord get a bus to NYC.

But we did like our hotel. We are such slow learners and it is such a big city. Zak has lived there for years and has tried to save us from ourselves. But no. We think of New York and we think Times Square. And stay there. He’d say “Mmmm, why?” And neither of us are 100% interested in staying where he lives in the wilds of Brooklyn. But he keeps saying “Stay down at the tip of the island, near Battery Park and Ground Zero. Financial district.” Having done it, I would have to say I would recommend that.

WHAT I DID NOT KNOW ABOUT THE CITY

And trust me, this list could be miles long, these are just tips of the iceberg floating by on on my sea of ignorance about New York City. 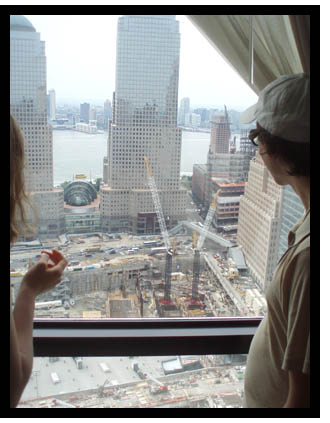 The first thing I did not realize is that Ground Zero is very finite. Very concentrated. Almost completely confined to one square block. Huge impact on the city and the world but incredibly the damage was mostly to those two gigantic towers. Our hotel, The Millenium Hilton is all glass and our room looks straight down into the hole. Which is just on the other side of a normal street. On the opposite side of the blast site is the all-glass atrium building full of palm trees, etc., and then the harbor beyond that.

To see an example of just how contained and concentrated the damage was, we had only to look beside our hotel. Right next door is a colonial church. And eerily, a colonial graveyard with old stones and ancient trees. George Washington prayed here. So they say. This is across the street from Ground Zero, this historic church over 200 years old. They lost one tree to the blasts. Not a single pane of its ancient glass broken was broken. Seems incredible, hard to comprehend.

SEND US YOUR TIRED, YOUR WEARY, YOUR HUDDLED MASSES

From our window, as I said, you could look straight down into the hole left by the tragedy. And wonder how massive buildings could just evaporate. People, desks, iron girders, paper, staplers, water coolers, vent pipes. All gone.

And then we could look to our left and see the Statue of Liberty welcoming the world to this very place. It took being there in person to see the proximity of welcome to disaster and be reeled over by that.

Another thing we did not know was that the New York Times is not as easy to find as I expected. I think I could have found it easier in Gray, Maine or Panicale, Italy than in New York’s financial district on a Saturday. Pretty much missing in action. Why they would not have had it outside our door or at least in the gift shop/newsstand in the lobby I do not know. But overall, we did like the Millenium. No, strangely for once I am not misspelling something. I can’t tell the difference, but our two kids are all particular about spelling and to have this hotel’s branded name one letter off in big letters on a big building made their teeth itch a bit. And it made it tricky to find, because there are plenty of “correctly” spelled hotels by this name. But this is the one that is right here where we wanted to be.

Not having the paper close to hand gave me a chance to wander aimlessly in a pre-caffine haze through the area and eventually get my bearings. Parks, fountains, delis, newsstands, good stuff. Starbucks every few feet and one of them eventually coughed up a paper so I could go back to the room and wait for the kids to wake up and come in from Brooklyn and find us. 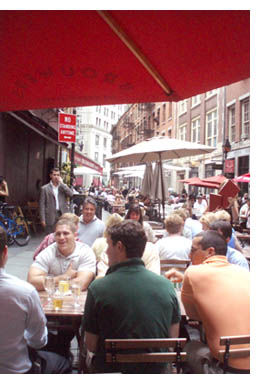 LETS TALK ABOUT BIG FUN IN THE BIG APPLE

The first night we were in town we spent in the Brew District of the Financial District. Hopefully all these young beergarden brokers had handled all your finances before they hit the beer tents. Acres of beer under tents on old cobbled streets. I guess it has always been this way. Our son says our Dutch ancestors all had breweries and taverns in this part of town, and he showed us where they would have been located. Some were pubs today. We had to sit and sample their wares, as you can imagine. Just to be historically correct, I think was our rationale at the time.

So, the next day, there we were. Wandering around Soho looking, not for a paper this time, but for a place to eat. We had to keep our strength up to go see a play on Broadway later. Tourists. You can plan on them wanting to eat out and see a show. We had tickets to see Ave Q, which is a highly twisted musical version of the Muppets that should not be played to the preschool crowd. It was fun and we got tickets that day by phone.

Oh, too many places to chose from. Let’s just go, I don’t know, over there! The place on the corner with Brazilian flags hanging from all sides named Félix. Just like the hurricane that by the same name that was, unbeknownst to us, getting ready to sweep in. We heard about that in the cab radio on our way back to the hotel after the show. We sat down by the wide-open-to-the-world full-length doors and just drank it in. Midge pointed at the menu and said “Brazilian, my foot.” Sure enough, it says Félix in big letters on the menu and just under that in the mice type it says “French Bistro.” Huh. And look at that. The menu is in all French. Walks like a duck, quacks like a duck. OK, it must be French. Has to be a story there somewhere. With soccer on the tube over the bar and France and Brazil usually natural enemies atop the ranking (both lorded over by Italy, finally) I can’t imagine the connection. Regardless, it is a party looking for a place to happen. On this link about the Félix you will find good pictures and one irate who panned the place. Wasn’t French enough for him. Oh, my. And the review is from 2005. Pay not a bit of attention to that. Did he SEE the Brazilian flags? Chee. We were bowled over. Fun, fast, fabulous. We ate like darned kings and people-watching was a royal treat too. The lank, white-shirted waiters with tiny pony tails, say, you know, they do sort of look French. Except, so polite, so engaging and fast like snakes, here came our drinks. Then our food. They look all slinky and languid but they were taking good care of us and got us in and out to our show in plenty of time. I could have skipped the show and hung here all night. So easily amused, n’est-ce pas? But what about that silver-maned owner looking guy by the door? Velvet white and gray paisley pants. Loose white peasant blouse shirt. That is a look I could so not pull off, but he is one happy camper. And what about the very tan and very blonde fortish fox in white halter dress made of clingy what, tshirt material? That’s right, the one looking for someone to samba with up by the bar? I LOVE this place. The food is righteous. We had four picky eaters including two hyper-picky vegetarians just raving. Ok, allow that we are from out of town, but then factor back in that we have eaten in Italy enough to have some idea of what good food is. 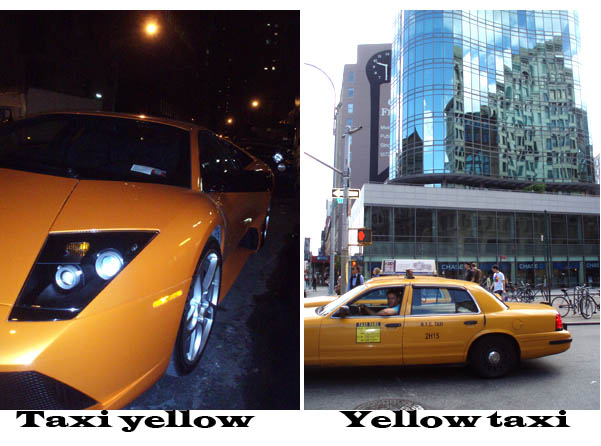 There is laughing going on, hugging, dancing, double kissing. Meets my definition of happy bar. Oh, it just got better. We’re always car-spotting wherever we go and now the big candy apple red 1961 Caddy that we’ve seen cruising around town all day has just slid into the primo parking spot right out front. The top is down. Cool guy in shorts, pretty pregnant girl, white white haired older guy all get out and lean up against the car and accept compliments on their fine ride. And later, they amble in at various times. They look like regulars and like everyone else here, when they come in, they look around, grin, and find someone to hug with one hand and find a glass of wine in their other hand. It’s just a love fest in Soho. Who says you can’t buy happiness?