DATELINE, THE APE-FILLED STREETS OF COCHIN, INDIA. – Apes and Vespacars have been being made in Italy for decades. The ultimate is the Ape Calessino which is sometimes found picking up passengers at the train stations or beach side ports of call. It is based on older 1980’s version of Piaggio’s Ape. Its rare to see one. But not rare to see any kind of “old” apes in India. They call them tuk-tuks bee-cause of the sound? Regardless, India got the concession to build this model of ape/tuk-tuk years ago and i think we heard they’ve been turning out 600 a day for years over there to meet the demand and keep the streets abuzzing. (Ape means “bee” in Italian. Because of the sound. Vespa? Wasp.

Ape, Kiki asked the driver to slow down to shoot his buddy’s ape coming up on them. 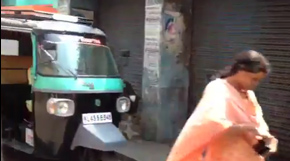 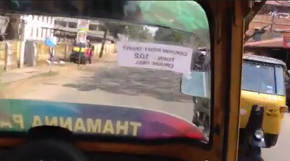