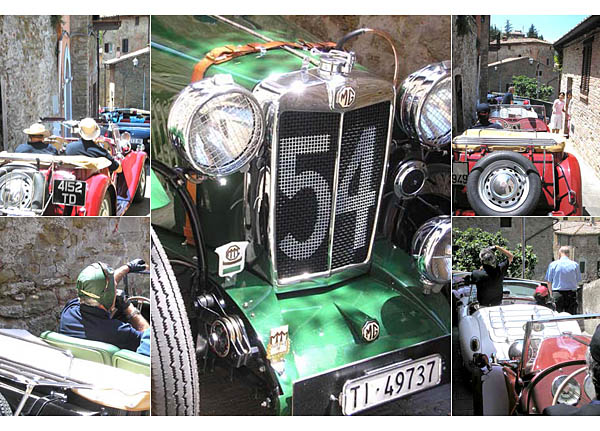 PANICALE, Umbria&mdash “Vieni! Wiley! Vieni qui!” Erica is calling from the door. I hear a rumble and her tone is decidedly… come sei dice? Tickled? I run up the stairs, turning the oven off as I go. It’s about quarter to eight in the evening and still as bright out as it was during siesta. As I round the stairs something shiny and red comes into view behind Erica’s silhouette – are those aviator goggles?! OK, I’m confused, is Panicale the new center of the Bermuda triangle- sometimes I wonder- but really? In any case I bet this’ll be good. Camera! Upstairs! I race up the stairs, grab my camera and head back out in the street just in time to watch the 20-car rally glide and grumble by.

And then, on Via Filatoio, a road that is definitely not use to the deadly Grid Lock. And most certainly not use to a full-on, 10-minute traffic-jam! But talk about a photo shoot opportunity! Hoods were waxed and sparkling in the light. Shiny, out-for-the-day, well cared for cars lined up- complete with women in hats, scarves and sunglasses; and men in goggles, driving gloves, captain’s hats and one in a gleaming black helmet (helmet gleaming, owner beaming). And all this without admission, without even bothering to put on my shoes. La vita é bella, infatti!

PARIS HILL, Maine—In the Wiley Traveler’s story above, did you notice something distinctly non-Italian going on there? Yes, those classics were all MG’s made in England, wrong-hand drive and all! Meanwhile back in Maine, on the same sunny summer day, I was at a classic car show and what did I see? The 1938 Alfa Romeo Spider. Superleggero. Totally unrestored and original. One of the most sought after Italian cars in the world. And it is in a private collection in Maine. Oh, it would have loved being in a Rally in Panicale on a summer evening!

Note on the Grid Lock mentioned above. This is not the first time we have seen classic car rallies on our street there in Italy and hopefully; it will not be the last. The rallies are usually a sedate, but carefully timed and controlled event. Non of that Vroom, vroom, Yay, I beat You stuff. Molto sistemato. Our understanding is that each driver is trying to drive a certain distance at a very precise and controlled speed. So, the traffic jam / photo opportunity is usually caused by the timing table set up in the piazza letting only one car go at a time. The beauty of these rallies is that the course is a surprise to the drivers and the town. When they appear SURPRISE, they appear. If the course was posted in advance, some drivers would practice it to the disadvantage of those who did not get to. There. Sum total of my alleged knowledge on the subject.