Peter turned to Joan and said “You think that last bottle I put in the freezer would be any good by now?“ She jumped up and said “Peter! That was two hours ago, it will be a Proseccoscicle!“ He ran up into the house to begin damage control.

We may have gone around the bend. Saturday was emails to and from Italy in the morning. Some in Italian some in English all on subject of Italy. About noon I signed off on all that BECAUSE We had a party to get ready for. Late afternoon on the beach in Ocean Park, by Saco, Maine. Both couples were people we have met through the wonder of the internet and one had a house in Italy and the other was considering a trip to look at same. To get ready for this, we were planning to spend the afternoon deep in anti-pasti preparation. Because this would be an all about Italy conversation, Italian and food and drink too. Just your traditional Fourth of July party.

So, about one pm the phone rings and a sweet voice says “Hi! It’s Lydia, and we are on Main Street a couple blocks from your house. We will be right over. Lets do lunch.” Yeah! Its Lydia. Stew running upstairs yelling “Lydia!” meets Midge, coming down the stairs yelling “Lydia?” Then we both got nose to nose and said “I thought knew“? Well, heck. We started throwing junk in far closets and revealing couches and tables we had not seen since before we packed our daughter off for camp at the last minute in the middle of the living room. And then the mystery Lydia called again, lost, whew. Momentary reprieve from governor and chance for all the pieces to fall into place. Oh, LYDIA. We are so dense, like we know a lot of Lydias. What WERE we thinking?

We know her as well as we know anyone. She is American and from nearby Connecticut. But we have only ever known her IN ITALY. Contextual issue. Even our fun drop-in guests are Italian related. Some times having houses in two countries is like having two separate lives. This was a fun case of the two blurring over and surprising us. 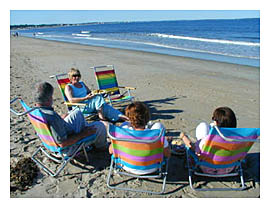 Later, after that fun lunch with “Italian” friends, we were at the party on the beach and all those great minds were thinking alike and the world was in total harmony, because everyone brought bottles of the fun fizzy Prosecco. Forget champagne. Forget Spumanti. The real deal is Prosecco. Friends in the Veneto introduced us to it years ago and immediately got our full and undivided attention. Believe me, they don’t save it for special occasions up there. They plunk pitchers of it on the table like it was beer. Right thinking people. Prosecco is not as sharp and dry as Champagne, not as dessert sweet as Spumanti, but like baby bear’s porridge, juuust right. Somehow sitting on the beach watching the colors of the blue in the sky and listening to the waves crashing on the beach made all the bottles of bubbly go away. All, save one.

Peter turned to Joan and said “You think that last bottle I put in the freezer would be any good by now?“ She jumped up and said “Peter! That was two hours ago, it will be a Proseccoscicle!“ He ran up into the house to begin damage control. The rest of us slowly and regrettably dragged our rainbow colored canvas chairs off the beach just ahead of the incoming tide and tossed them into the tall grass at the edge of lawn. When we got into the long screened porch, Peter was gingerly holding the last bottle of Prosecco, or, should I say, block of Prosecco. And looking at it through squinty eyes with great scientific interest. Yep. Frozen. But the cork hadn’t blown. Whew. Peter made it his mission to keep that bottle near him for the next hour.

Ready yet? Nope? How about Now? Eventually, holding it up to the light we could see the bottle shaped baby ice berg melting a bit and producing some strange shaped chunks burbling left and blurbing right as the bottle was tipped back and forth. Finally, he of multiple MIT degrees, said that in his professional opinion, it was high time to try it. And you know that was the bestcoldestmostawesome bottle of Prosecco any of us had ever tasted. Now kids. Don’t try this at home. But we did live to tell the tale. All Is well that ends well and that night of Italy on a beach in Maine ended very well indeed.

Only six more days until Italy!