A bit surreal overall but, incredibly, it seems that WAS us backstage, in the same room with the Rolling Stones, eating their lobster ravioli, their long white asparagus with roasted peppers, their polenta, sampling their red wine and dining on and on in a meaningful and mostly Italian way.

IOWA, VIA OMAHA—Several times, this trip felt like flipping through a book from back, to front. When you start by knowing how it ends. And end at the very beginning when you know nothing at all. I am flying west today. Across the country. And, it feels like, across time.

The captain says &ldquo’Well, it is now 9:30 a.m. here in Chicago. You can set your watches back for Central Standard Time if you like”. I wind mine back one hour. And several years. Before Umbria. Before Maine. There was Chicago. I found myself here in graduate school. Found my wife too. And my first job. Good old Chicago.

Next stop, Omaha. Rent a car and follow the signs to Des Moines. Now the video replay screen on my Mental Time Machine is a blur of yearbook pictures, parties, nervous dates and proms. I see the exit signs for Drake, I slow down but don’t stop. I always think I will. But I haven’t yet. Past Des Moines and rewinding faster now. My life flashing before my eyes in reverse chronological order. 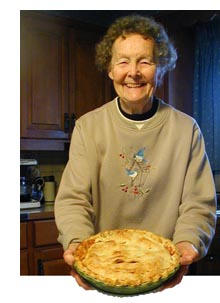 Am getting younger in the process? Does this kind of time tripping work like that? I know the answer to that one. But, ahead I see there are signs we’re closing in on Conrad. Where we can go far, far back in time. Conrad, full of pioneer ancestors who settled the town. And left their family names on everyone in town and on rows of granite in the cemetery. I know all their names. I recognize their ever-serious, black and white faces looking back at me from frames on aunts’ and uncles’ mantles and bookshelves. High school memories are bubbling up and drowning out college now. There is Kathy’s driveway. The school bus picked her up there every morning, right after I got on. She lives there still, but I would not know her. Not now. I only know the person she was, then. Our farm. Our mailbox, on its post, two miles from Grandpa Stewart’s farm and his mailbox.

Mom and Dad. Coffee in the kitchen. Something baking in the oven. This is the house I was raised in. I’m all the way back now. I’m home. Is that apple rubarb pie for me?

OMAHA— Surely some of the rewind and flashback feeling of the trip stems from one of the reasons for the trip: The Stones. The Rolling Stones are playing in the Midwest. Just like they did in 1967. I did not see them in 1967. But I will fix that oversight in 2006. Can the same stones really have played both those dates here?

A bit surreal overall but, incredibly, it seems that WAS us backstage, in the same room with the Rolling Stones, eating their lobster ravioli, their long white asparagus with roasted peppers, their polenta, sampling their red wine and dining on and on in a meaningful and mostly Italian way. The Italian influences in their huge spread of gourmet food far outweighed the occasional British classics like Shepard’s Pie.

Yes, we were in their inter santo santorum the “Rattlesnake Inn”. Just as a serious hanger on. Not any doing of my own. But tickled nonetheless just to be in their hospitality suite with them. No, we did not get to actually touch, talk or even photo. At a certain point, the tables were pushed back, the Stones handlers rushed them in a for a Grip and Grin Official Photo with their opening act, Brooks&Dunn. And then they rolled those Stones right out of the room and onto the stage. Of course, I had my camera with me! And you know I wanted to take pictures. But, I almost got that trusty Olympus taken away with the one spy photo you see here from the Stones sound check. The venue looked empty except for the Stones on their massive stage. I took one shot, no flash and headset-wearing Men in Black rained down on me, commando style. From the rafters? I do not know where they came from. But they came. They stoically re-explained the subtle meaning hidden in the Absolutely NO Cameras Allowed signs posted around the auditorium. Ok, ok, all right, already. I get it. The passes we had, shown here, really parted the waters. Well, right up to the part about the cameras.

Thank you Brother in Law for breaking me into the epicenter, the very heart of rock and roll!