We had a trip that carried us from Miami to Buenos Aires and Uruguay. What an amazing adventure that was. Did you know it is full blown summer down there in the middle of “our” winter? Something about being South of the equator. So, we were glad to be chasing that kind of weather. On the other hand we were mildly nervous about our lack of language skills there. But, you know what? Italian is better than no Spanish at all. Seriously, I know nadda in Spanish. Or so I thought. But I found myself asking where the eggs were at the buffet in the hotel (the waitress said “Sto preparando”), ordering coffee with sugar, asking our waiter for a new white wine from the Salta region, translating things people handed us on the streets. A lot of things were so close to Italian, so in the right context and so blatantly obvious that we learned them on first exposure. (felt like we did!) Whatever we were doing, it was working! It was a total lark. Thank you Years of Italian Lessons, thank you. Oh my. Italian as a portable skill? Who would have thought? Spanish is so omnipresent in the world, and Italian is so Italo-centric. Is that a word? Chi lo sai.

Now, I can be on record as knowing nothing about nothing. Especially, all things linguistic. And maybe because BA has a huge percentage of people of Italian origin, maybe because of that their inflections are Italian. Every Argentinian we met had AT LEAST one grandparent directly from Italy. Che sorpresa. And just maybe I’d be at a total loss in downtown Madrid. But, on the other hand, Italian was as helpful in Miami’s Little Havana as it was in BA. BTW, having hot hot espresso leaning on the outdoor counter with the cool, cool Cubanos at Cafe Versailles? Worth the trip. That is a serious cup o Jose. Doing this back and forth language dance was fun, like a 24 hour word game. And as eye-opening as that Cuban coffee. Could not have been more pleased that our Italian at least cracked open the door to the Spanish-speaking world. In ways I would never have imagined.

Next month we’re off to where they really speak Italian: Umbria! 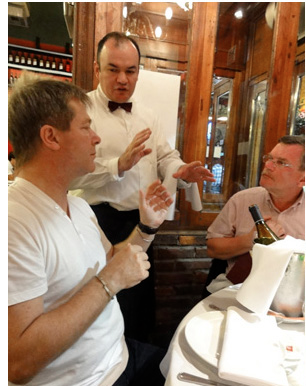 PS: But seriously folks, where has the blog been? What can I say? Wandered off muttering to myself? Instead of putting my mutterings on electronic paper? I wasn’t sure if anyone was out there listening or if I was actually talking to myself. A lady from England wrote this morning and said she hadn’t seen any blogs lately and asked if I was OK. Sort of made me put my feet back on the road. We’ll see where it goes. Good intentions and all that. We’ll be in Italy in a few weeks so that will be a good test.

2 Responses to “Italy vs Spain? In BA, the Spanish sounds very Italian. Can we call it Italianish?”