When we were in Italy in the summer I wrote up a note book full of stories but didn’t match them up with photos and post them. At the time I said, euphemistically, that I was “researching heavily” and I kept right on partying and not posting. And to further dig myself into a hole I said “but as soon as I got back I’d churn those stories right into print and make them visible to the naked eye.” And then we went to Montana, and then to Ontario to get a 1983 Italian Ape. And Nashville for the CMA’s and Iowa for Turkey Day, later, that same year . . . flat out of lame excuses I’m back.

And you know, in the depths of winter is anything more fun than a fond look back at those palmy summer days we take so for granted at the time? So, let’s step back and put ourselves into that warm place called Sunny Italy. And really appreciate it this time!

PANICALE, UMBRIA– on Independence Day. BLAMM! CRACK! BOOMMMMM! What fireworks this year. Except. Fireworks on Independence Day is an American thing. They don’t do that here. These firewords are just Mean old Mother Nature saying Enough Festivalling put it away for another year. The shake-the-house-down drumbeat of thunder and the eye splitting lightning put a wild end to a lovely pastoral day. It was blue skies minutes ago and now I’m running down the cobble stones toward home, and getting soaked.

The day started quietly. With coffee at the bar. Breakfast snacking at home later, we mindlessly wrote friends and sorted photos for a couple hours. We all have our little things that make us happy. Things we do that whisper We’re Off Duty. We’re hanging out, far from home and adult responsibilities. I remember a story in a magazine about this very concept. The writer spent the whole story talking about how much he enjoyed cleaning his expresso maker. the ritual of it all was soothing for him and as much fun as making and drinking the coffee.

Even though we weren’t cleaning a coffee maker we were relishing every lazy second of the day. And any day really worth its salt should have some gardening in it, so I did that for a couple hours. Dig, dig. Weed, weed. Look out at the lake, listening, eavesdropping sometimes I’ll admit, to the chatter of the people walking by on the street above the garden. And since I’ve been multi-tasking, the clothes in the washing machine are ready to hang out in the blazing sun and Midge has lunch laid out in the newly cleaned up garden. She is giving The Chefs of Italy a run for their money this trip.

Last night it was a stuffed eggplant to die for. Fresh ricotta like we can only dream while we are trudging down the isles of the ShopNSave here in Maine. And today’s highlight is paninni with the miracle melt in your mouth Spannocchia salumi. Ok, now. Dust those crumbs off you and head to the other end of town to see the start of this year’s Ruzzolone. The various squadra teams were right ready for action on this very delayed game day. This competitive cheese rolling event is usually the day after Easter. Little Easter equals Pasquetta. But that day was cancelled due to insane rain. Today is fine for rolling cheeses around a course, sun is hot, but in the shadows light as a feather breezes cooled the giocciatori. We tramped up and down the course just outside the city walls cheering lusty “complimentis” when the cheese cooperated and curved round the corners. And made sympatheric groan noises when the cheese dived off the road and into the olive groves ten or twelve feet below road level. 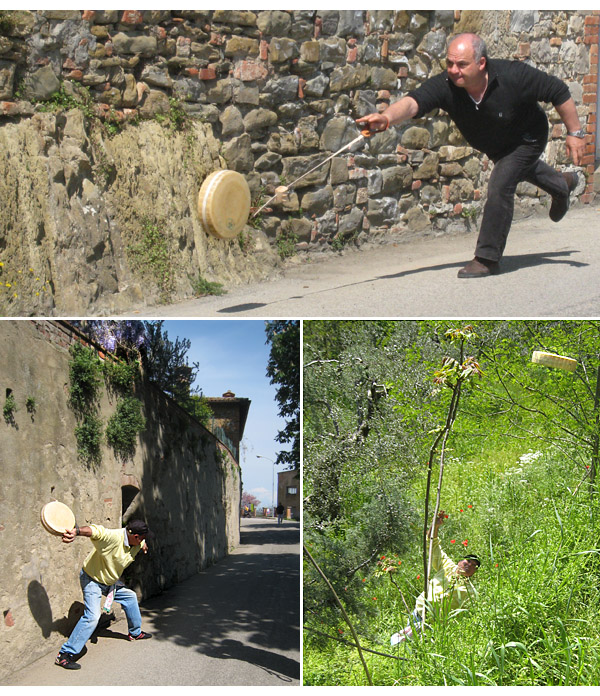 The wheel of cheese has a healthy rind all over it and is pretty resilient, whacking walls and posts and even making a healthy scar on one tree – slashing it a glancing blow as it buzz-sawed its way down the street. Waves of friends washing by us like the tide as we all tracked the progress of the careening wobbling cheese back and forth like foxes following a round and possibly very tasty gingerbread man.

It wasn’t too long ago one friend told us that there was another version of this as well. The “addizione” was the classic wheel made of wood. Adriano said with a sigh “the streets to the bottom of the hill would be lined the whole way with spectators not like today” Pre-tv and maybe pre cocktails in the piazza I can imagine. Looked like plenty of crowd to me. And I’d rather get hit by a wheel of cheese than a wheel of solid wood anyday.

At a certain point we decided we’d had exactly the right amount of following the bouncing cheeseball and felt we heard a gelato calling our names. Peach Pineapple was the combo speaking to me. Outside the café a local man I know on sight but not by name is hitting a lick on the accordian. Our Swiss neighbor Klaus is a music composer and professor of same. He was loving it and effusive in his enthusiasm for the stance the music was taking. Toes they were atapping. Sandwiches of porchetta were stacked chest high on folding tables. The meat dealt out on slabs of Easter cheese bread on a paper napkin. Wine was poured into plastic cups and then for a food finale, they broke into the 22 pound, tall-as-you-are chocolate Easter Egg. They were handing out chunks of chocolate as fast as they could with glances up at the heavens because its getting very dark very fast.

Hands full of the chocolate that Bruno pushed on me, I was headed up the cobblestones towards home with a bit of urgency in my step, when Andrea waved me into his restaurant and out onto his balcony overlooking the lake. “We’re really going to get it” he said and he was right. Above the lake we can almost always watch weather from on high, seeing it start at the lake and just walk itself up the mountain. “You can see it coming” we nodded sagely to each other, “but you can’t do anything about it.”