Flight is quieter back here, the waitress in the sky is settling herself into one of the regular seats. One that I have to walk right by. She’s done handing out the Snack Bars and is having a little breakfast herself. Except LOOK WHAT SHE’S HAVING EVERYBODY! Juice! Scrambled eggs! Fresh fruit! 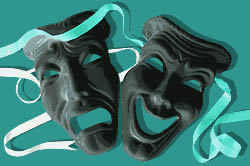 SOMEWHERE OVER BUFFALO, New York—“Hi, I’m in the seat RIGHT BEHIND YOU and I was wondering if you could either not talk to each other ACROSS THE FREAKIN’ AISLE AT THE TOP OF YOUR LUNGS or move into empty seats beside either of you so you could talk at normal volume. What do you think? Oh, one other thing Would you mind terribly if I asked if YOU KNOW HOW LOUD YOU ARE TALKING? Or even how much? Does the altitude affect how often you come up for air, just curious. And I have to tell you: The data handling capacity of those new units you just installed back at the home office are fascinating, no, I really I mean it. I had honestly hoped to get some sleep here on this flight and thanks to your sparkling conversation, I got over that. I even started thinking about trying to maybe watch some movie BUT YOU ARE TALKING SO LOUD I CAN NOT HEAR THE MOVIE. WITH THE HEADSETS ON. AND THE VOLUME ON HIGH. Well, let me say your conversation, every word of it has REALLY MOVED ME. I see there is an empty seat towards the back and hopefully, back there, I might not be able to HEAR EVERY SINGLE SYLLABLE YOU’RE YELLING BACK AND FORTH AT EACH OTHER ACROSS THE AISLE way back there. Ok, have a nice day.”

What the heck. I’m up. Now. I’m headed toward the back anyway. I might as well check out the facilities. Did I say it was an early morning flight? Very. I got up at 3 or so this morning. To catch the four thirty AM bus to Boston. Do you know that buses run at that time of day? And this one was full? And then after the groggy dark bus ride to the airport, I caught this flight. The 8 AM Boston to Chicago. Well, at least we had breakfast. And what a breakfast it was. One Quaker Snack Bar. Probably a free sampler promo gimme donated by Mr.Quaker himself. Sort of like the Rice Crispy Marshmallow Treats that everyone in America thought were so ripping good at bridge parties in the late 60s. So, anyway, I’ve made the bathroom sink make that great space age sucking noise, and I’m out past the fold-y door, making my way to my new seat in the way back of the plane. Flight is quieter back here, the waitress in the sky is settling herself into one of the regular seats. One that I have to walk right by. She’s done handing out the Snack Bars and is having a little breakfast herself. Except LOOK WHAT SHE’S HAVING EVERYBODY! Juice! Scrambled eggs! Fresh fruit! How about that? True story. American Airlines flt 1045, 8:33AM, Boston to Chicago/OHare. On a MD-80 jet, Thursday, Jan. 26th, 2006.

And people wonder why I am ‘tankerous early in the morning.