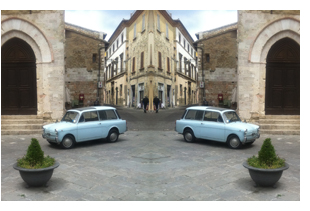 TRIESTE, ITALY –The lost province of Istria fading out of sight in our rearview mirror, we were headed through Friuli-Venezia (FriuLIVEnezia as the posters remind you) then the Venato. Then another hyphenated province, Emelia-Roman this time, then Tuscany, and finally “nostra” Umbria. It was five or six provinces in seven plus hours but leisurely, sunny, well-caffinated “don’t-miss-any-AutoGrills-at-all” kind of hours.

Barely paying attention, we were watching the lush landscapes roll by, and thinking The Big Thoughts. The ones we all think in quiet moments of a long trip when our minds on autopilot. When SUDDENLY like a EURIKA moment, it dawned on me: We’ve been everywhere, man, we’ve been everywhere. Over the years we have managed to see Italy from Reggio di Calabria and Siracusa in Sicily in the South – to Chivasso in the North (just below Lugano in the Italian speaking part of Switzerland). And from Genova and Torino in the West to Trieste in the East.

I think we can safely say we’ve pretty much done Italy top to bottom. And now add, the left to the far, far, almost in Slovenia, right.

That revelation came to us the first week of our trip. But, oh so obviously, in between those four corners there’s things we will admit we’ve missed. For Example: just the other day, we went to a mid-morning! wine tasting at San Clemente Vineyards outside Montefalco. Hey, it is Eleven AM, somewhere. But, such are the rigors of traveling with our wine-importing friend Paul Turina of Turina Italian Wines. Back on the road, it dawned on us that we could take our friend Andrea’s (of Masolino’s in Panicale) advice and See Bevagna.

Bevagna is half an hour from Panicale. But, yet. We’ve never been there? How can that be? Walking through its gates we knew were someplace quite different. Different look and personality from any Umbrian town I’ve seen to date. Small, walled, lower buildings, on a plain rather than a hilltop as are many walled towns. Medieval overtones everywhere. Including one 14th century fountain that actually mirrors the one in Panicale. Just as Andrea had promised.

It was a dark and stormy day as they say in Peanuts. The word “cold” could be thrown in for good measure. But it was still a lark to shop about, have a nice lunch, see their museum (lots of Roman artifacts) go to their theater and then for the finale see the town’s pride: a huge black and white aquatic themed mosaic floor of a Roman Bath. This big floor was only a third of the whole bath system, the cold room. It was saved because someone built a house over this part at some point in Post Roman history. It was just re-discovered about 1900. Honey, look! I pulled up the carpet and there’s another darn Roman mosaic in this room too. Che sorpressa!

And then, we met a charming British artist having a show of his ink drawings in a renovated church/gallery. And then, when asked, he pointed us down a nearby alley to his favorite restaurant. Which proves that when you are out and about, the best plan can be – no plan at all. Sometimes translated as Stay Loose. Which we did!

We certainly had no idea at our coffee that morning in Tavernelle that we’d be enjoying Bevagna for lunch. And just as our original destination of Montefalco had passed us to Bevagna, Bevagna was passing us on to Bettona. We were headed away from Bevagna on a back road outside of Torgiano, when we looked up and saw a towered village on a hill high above us and Bettona signs pointing right at it. That’s even closer to our home. How did that get there? Really no idea. But we’re saving Torgiano and maybe even Bettona for another day. Maybe we’ll discover them with our next round of company. Stay tuned.

Are we having fun yet? Yes, yes we are. I think we can safely put this whole day in the Win Column.