FALSE FRIENDS BETTER THAN NO FRIENDS AT ALL

Meanwhile back on Planet Earth we’re still stuck with using our new Garzanti Hazon dictionary. Which is interesting because instead of being lets say “English/Italian” it was more of an “Italian/English” thing. Which is not surprising since we bought it in a book store in Umbria. And it had a feature I’ve never seen in a bi-lingual dictionary. It is called “False Friend.” Just like that, two words, in English and they were call outs in blue boxes on nearly every page 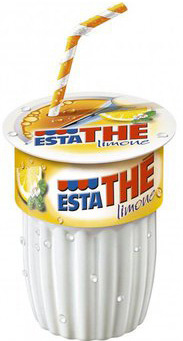 ESTATHE. The small plastic cup spins around in my brain. I stare at it again. That doesn’t look right. But there it is, perched on a skinny shelf in a Formica cupboard over our stove. Next to the breakfast cereal and a box of pasta. We are in the midst of a ruthless search and destroy cleaning frenzy. Things left in closets, under beds, behind doors, things left alone for years were now being looked at with suspicious eyes. Especially food.
As we all know, in a cleaning situation, any distraction is a good distraction. So, Even though I knew this was a ready to go cup of tea, I got to thinking about its name. And thinking what incredible hoops we poor Innocents Abroad have to go through to digest this. Funny thing about language. We’ve been looking at Italian words for years before we started studying them. Usual suspects, pizza, piazza, paparazzi, these are all words that are so popular and omnipresent that they became bigger than Italian and spilled over into English. There are dozens and dozens of them.

And then you have words in Italian that you don’t really have to learn, you just pronounce them a bit different. “Idea”, for example in Italian, or French for that matter, looks just like “idea” in English. It just sounds different. But you still see it and get it. Same with aeroplano for airplane. I can kind of work out words like that out for myself on a good day. Words like these give you hope that maybe, just maybe, you could kind of wing it, bluff your way to fluency. But when you wake up from that dream, you notice that for every airplane (aeroplano) there’s dozens, no thousands of works like “seat” (sedia) that don’t ring any bells of recognition at all. You just have to grab a sedia, somehow force it into your memory banks and use it until you own it.

And, of course, keep a dictionary nearby. We’ve bought any number of them over the years. But couldn’t find a single one in the house this trip. I could not for the life of me parse out a couple of the lame, round about, pun-based jokes Groucho was making in a new Dylan Dog comic. (My idea of a fine Italian text book. I know, grow up Stew) Very hard, I’ve found, to bluff your way around subtle, double entendres. So we buy another dictionary. Maybe in the false hope that by having the right word in our hand, that that by itself would make us more fluent. You know how getting a health club membership conjures ups vision of friends asking if you have been working out? 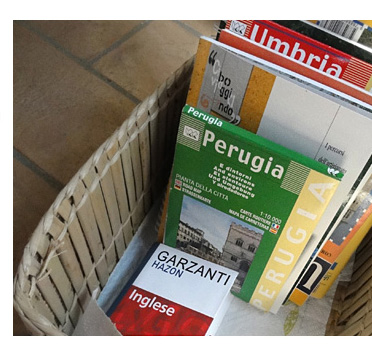 (Have you seen, for example, the trailers for the new Di Nero movie “Limitless?” The hero takes a new potent pill and suddenly he can do almost anything. He’s quick, he’s smart, he’s rich. Girls coo “Since when do you speak Italian?” He shrugs modestly. Where can we GET these pills!?! In the movie the pusher friend says they are “fda approved.”)

FALSE FRIENDS BETTER THAN NO FRIENDS AT ALL

Meanwhile back on Planet Earth we’re still stuck with using our new Garzanti Hazon dictionary. Which is interesting because instead of being lets say “English/Italian” it was more of an “Italian/English” thing. Which is not surprising since we bought it in a book store in Umbria. And it had a feature I’ve never seen in a bi-lingual dictionary. It is called “False Friend.” Just like that, two words, in English and they were call outs in blue boxes on nearly every page, in both the English and Italian halves of the dictionary. I thought that was funny too. But it’s clearly presumed both English and Italian readers would grasp the concept of a False Friend. Made quickly sense to me and soon found myself looking for these small blue islands of clarity in a sea of words, words, words.

False Friends’ main job is to make you pay attention. And not go off thinking you knew a word when you really are just making a quick leap, a logical assumption.

Take the bookstore in Castiglione del Lago where we got the dictionary for example. Book stores and libraries have a lot in common at some level, no? What with both of them being full of books and all. Guess which one is a “Libreria?” That’s right. Not the Library, but the bookstore. Accident / Incident strangely enough don’t equal Accidenti / Incidenti at all but in fact are double-dealing False Friends of the best sort. They mean exactly the opposite of what you might logically expect. In other words, when in Italy, you have car incidents instead of accidents.

Which brings us back to the plastic cup. A cup of what is evidently by context a cup of “THE.” Italian is truly a wonder to pronounce, as it is perfectly phonetic. See a letter, pronounce it the same. Every, single time. Once you get the hang of it, it is not at all impossible to see a page of Italian and rattle off a few sentences at normal talking speed. And not have the least idea what you are saying. But still be pronouncing somewhat as if you had a clue.

THE AGONY AND THE ESTATHE

But then there is the letter “H” It is consistent, I’ll say that for it. But consistently silent. It sometimes affects other letters near it, but even then in a regimented way. Ci is pronounced chee but chi with an allegedly silent “h” is suddenly “key”. But, here, in this word, “THE” it is just plain silent. So the word “the” could just as well be spelled “te” but that word is spoken for and means You in a familiar sense. But “the” with an “h” in it means tea in Italian. And ESTATHE is a brand and a cute play on words. (Giocchi di paroli) Pronounce the “esta” and “the” and you have a word that looks like estathe but which, because of that silent “h” in Italian, sounds like “estate.” And despite how that word may look, it doesn’t mean your ancestral home in the country. In Italian “estate” simply means “summer” and what could be better in the summer than a nice iced tea?

Cheers, and See you in Italy,