At some point the subject of Gelati came up. I’m not all that attracted to ice cream here in the states. I’ll eat it,of course, if you plop it on my pie/cake/empty plate/bowl/outstretched hands. But gelati, in Italy, that’s in the give us our daily bread realm of things, isn’t it?

PANICALE, Umbria, Italy – So, here I am walking through the double glass doors of Aldo’s café for the millionth time with yet another burning question on my mind.

Oh, look, American friends. “Hi, Hi”! and oh look over there, some English-speaking German friends “Hi, Hi” some more. Aldo looks up from loading ice cream bars into a cooler, wide eyed, skips a beat and then shakes his head and laughs at himself. “Never going to learn” he says “You all say Hi as a greeting and I’ve heard it over and over but it sounds just like “Ahi” our word for “Ouch!” And I jump everytime.” Foreigners. Its not like we don’t know how to use big words like: Ciao.

I wait till the bar clears and Aldo is squeezing me some orange juice. “Aldo, I’ve been trimming and pruning my garden for days. I’ve got leaves and branches piled high as anything. Know anyone with a pickup?” “Oh, you need Primo.” He says, “You know him?” I nod; Sure, Primo is the mason. He was supposed to fix a wall in our kitchen last winter, and I need to talk to him anyway.

Ever helpful, Aldo knows how to make this happen. “Go ask Andrea. It’s his uncle.” Never knew that. I tromp next door to Masolino’s and say the whole thing over again and Andrea says, “Come back at 1:30. Primo’s here everyday for coffee after lunch.” Didn’t know that either. Can’t believe they gave away his location like that. And of course he didn’t show. “Don’t know where he could be,” Andrea says, looking at his watch. While we were waiting, killing time, talking about this and that, Andrea was polishing glasses behind the bar for a while, and we both flipped through the sports newspaper and admired the view out the open door of his balcony down through the cypresses to Villa Le Mura.

At some point the subject of Gelati came up. I’m not all that attracted to ice cream here in the states. I’ll eat it,of course, if you plop it on my pie/cake/empty plate/bowl/outstretched hands. But gelati, in Italy, that’s in the give us our daily bread realm of things, isn’t it? And this is Andrea talking. Andrea’s family owns Masolino’s restaurant and his mother is the ranking chef in all of Umbria. She has an Olympic sized medallion to prove it. Go Bruna! Naturally, when they are on the subject of food, I’m all ears. Holding up his thumb and the nearest two fingers he says “There are three places you need to know. My top three for Gelati – Uno, Gelateria Snoopy in Cortona.” I know that one! It is right next to our friend Nando’s Bar Sport in the epicenter of town. “Due,” he continues, “Quinto Vizio, in Perugia, near Warner Village, the movie complex.” I think he said the name means Five Vices. Can that be right? Can there be that many vices related to Gelati? “Tre, Bar Alise, by the train station in Castiglione del Lago.” I write them all down. Write off Primo ever coming and step out into the piazza. And, there he is. He’d almost slipped into the cafe on the other side of the piazza. He was that close. Aren’t small towns great? 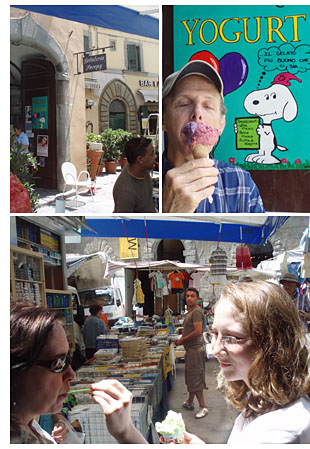 CORTONA, Tuscany, Italy – The next day Midge and the two girls and I decide to zip up to Cortona for a bit of adventure and gelati. I called our friend Elida to see if she needed anything there or if she wanted to come along and see sites with us. She lives here in Panicale all the time and is always up for an adventure. Ma, no. Not today, she has stuff to do. I mention that Andrea’s top Gelati shop is in Cortona and she agrees that Cortona has the best gelato. Except she thinks it is Dolce Vita. Says she makes the forty minute one way trip to Cortona just to get the gelati at Dolce Vita. Wellll. It is clear what must be done. It seems a taste-off is in order. We’ll do one gelateria on the way into Cortona, one on the way out.

I love having a simple-minded travel goal. So easily amused. We spot Dolce Vita not long after we park the car. It has four seats at a tall table. Each seat is shaped like a giant fiberglass ice cream cone. But it is the gelati that steals the show. Incredo presentation. Incredo. Mountains of each exotic flavor and huge piece of the kind of fruit represented capping each mountain to make it blindingly obvious, even to tourists, what is on offer. Halves of papaya, for example, grace the peachy pink tub of that flavor on the left, and whole bananas sit atop the container right in front of us. Bingo. That is the one Midge has been looking for! She’s in for all banana all the way. Graysie has the purple/blue blueberry and pairs it with the bella papaya. Katie has a nice contrasty combo of dark chocolate and watermelon. I have a cherry swirl thing with frutti di bosco (forest berries, they say, meaning raspberries and blueberries and black berries and such).

Love mine. But, hey, its gelati. How far wrong can you go? Midge is over the moon on the banana. Graysie likes hers but isn’t raving. Katie only likes her chocolate. I, on the other hand, tried her watermelon and loved it. And I’m not a fan of the actual melon itself. I thought mine was great. Especially the very frutti one.

We fiddled about, shopped – it was market day – took pictures, enjoyed the sunshine and just got a kick out of being out and about. We got some pizza in the piazza for lunch and tried to work up an appetite for Gelati #2. Snoopy is right beside the market, and as it was closing up for the day, we ducked under the awning of a place selling belts and shoes and dresses and checked that Snoopy dog out. I’ve been there before many times but this time we were there for serious research. Midge said she was full, full, full and none for her thanks. Graysie had the green team of mint and green apple. Katie had futti di bosco and lemon. I did the frutti again and put it with Moro (black berry).

First, the gelati here is nothing to look at. Well, they were till I’d seen Dolce Vita beauty pagent of gelati. The tubs of gelati at Snoopy just lay there, great colors, just no art to it. Which is fine, but I missed the over the top Dolce Vita presentation. But, on taste they may have outdone themselves here at Snoopy. Bright, tangy, tasty. Katie’s lemon was sour and refreshing as biting into the fruit itself and my fruits were just knock out. I didn’t think I would like Graysie’s green on green combo, but I did; it was quite wonderful.

Which gelateria won? They were both great, and if pressed, I would have to say we were the winners. To be there in Cortona on a sunny summer day, licking gelati off our knuckles from one end of town to the other. OOOH, can I try a bite of what you’re having? 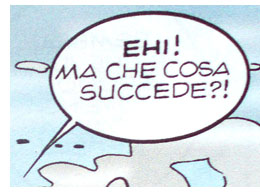 P.S. Primo and the Pickup ? This whole Italian ice cream adventure started with me looking for a pickup. Well, I really found one. Except it was what a pickup might hope to be when it grows up, a ten ton big rig that had to be backed through a crooked tunnel to get to the street below our place. When I tried to gratefully, happily pay them, Primo’s son Sergio held up both hands in a classic No, No, gesture. I had the money in my hand. I said, “but it is such a favor” and Sergio pointed at me, like I had raised my hand and really gotten the correct answer, and said, “Preciso.” Exactly. You got it. They wanted it to be a favor. And it was. Thank you.

6 thoughts on “Gelati. Cortona’s got the A-List”