The festival is crowded but civilized. We walk wherever we want and see things along whatever path strikes our fancy. Until, suddenly, we’re swept up toward a church and in the distance we can hear a band forlornly playing as the host approaches. 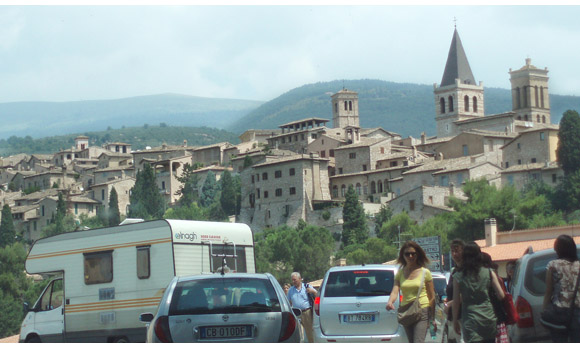 SPELLO, Umbria, Italy–Midge knows a short cut. There is, evidently, some shopping that has taken place near here. Ceramic-related shopping she thinks. Its early and we take back road after scenic back road through one sleepy town after another. Us and the occasional spandex and logo covered bike rider/professional racer wannabe. Is there any other kind of biker these days? No matter, we’re happy to share the Sunday morning with these few brightly colored fellow travelers.

As I write this later in the garden, bees are buzzing, an orange butterfly lands on my knee. The hummingbird-like bug is putting his long needle nose in the sweet purple lavender, but Focus Stew, Focus. Get us to Spello, already. It is not that far from Panicale but we are such slugs that we’ve never been right there so we’re staying sharp looking for signs. We’re south of Perugia, south of Assisi, but it is before Foligno off 75. I see it! We’ve been driving on the flat agricultural plain around the lake when suddenly, there is Spello looking down on us from its cliff, the houses uniformly pale pink, the color of Bruno’s cactus blossoms. There’s the exit. Gulp. There’s the gridlock. This town is not asleep. It is wide awake and neck deep in cars. We bump up over a curb and onto an available sidewalk, lock up and step away from the Fiat Bravo. Someone right behind us does the same and suddenly those two blocks of sidewalk are filled too. To fortify us for the flowers we sit for a minute in a huge café under a resort hotel. Everything is better after a cappuccino and one of those fruit tarts. We follow crowds across the street and it begins. Just like that. Quiet coffee to full emersion in a festa in a matter of a few feet.

THE STREETS REALLY ARE PAVED IN GOLD. AND RED. AND GREEN. EVERY COLOR UNDER THE SUN.
AT LEAST DURING CORPUS DOMINI.

Did I say what we are doing here? Meant to. Happily, it is spring, flowers are everywhere and it is Corpus Domini. Even the catholics among us are not solid on what that all entails. Sounds like Holy Body. But we think it is more in the body as in the host at communion and why not have a flower festival for it? Because, here in Spello they have covered the streets with major sized, highly detailed art made over night from flowers, seeds and petals. Like someone had steamrolled over a Rose Parade float. Its all biblical themed, huge, happy, bright and hard not to be knocked over by the scale. Several are 30 or 40 feet long? I didn’t measure them but they are big, trust me. The teams that did them are proud but not really standing tall, often sitting or laying down. 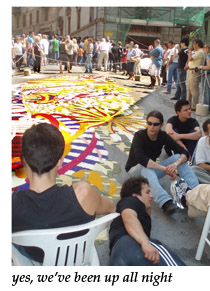 We think they’ve all been up all night doing this. I read one brochure that claimed 2,000 people would be up all night, including several hundred 3-14 year olds. Tradition! And it specifically said they would not be playing about. Flowers to gather, dissect and arrange artfully. During the show there are step ladders and metal viewing stands here and there and people go up, snap a photo, come down and someone else goes up. Some of the teams are spraying their art if they are in full sun to keep them fresh. There are flowers not only below us, but beside us in doorways and over hanging from balconies. And above that, bright blue skies. What a day we fell into here.

The festival is crowded but civilized. We walk wherever we want and see things along whatever path strikes our fancy. Until, suddenly, we’re swept up toward a church and in the distance we can hear a band forlornly playing as the host approaches. A tower full of bells begins to ring, priests trudge by carrying loudspeakers on a pole, someone is chanting, someone on a scratchy recording is singing and eventually the band is right in front of us. Tubas, trumpets, clarinets prevail. The priests wear white and gold robes, Caribinieri are in full dress and that means the Napoleonic hats with red plumes. Canopies, big, tall, old painted canopies sway by protecting the host and everyone shuffles, shuffles, shuffles through the flowers underfoot. One by one, foot by foot, the dirge plays on. The procession rocks from left foot to right in solemn obliteration of the flower designs. Strangely, it does mess them up but it doesn’t ruin them. And the designers, some more than others, rush to pat things back together. In the end it doesn’t matter too much, flower petals are ethereal and destined to dry up and blow away, anyway aren’t they? Luck was with these artists this year as it was perfect out all night, not a hint of breeze and for the first time in a week, no evening showers. (All this weather wonderfullness was reaching its high point after church at 11. By five that afternoon it was pouring buckets, so good timing all around.)

We followed the procession to the park where plant sellers of every stripe were tempting the crowd successfully with their wares. Shoppers were carrying people sized rose bushes to their cars all around us. We found a table of seriously exotic cactus and picked one for Bruno that looked like a pale green softball with long needles marching around its stitching and two big candle-shaped flower buds sticking straight up from the top. Wonder what that will be like when it grows up. We’ll see what Bruno thinks of that.

The medieval festival in Bevagna starts today and its just down the road. But, this has been such a star crossed, by the numbers, perfect kind of day that we think we should just go sit in the garden and think about all this. But you know that porchetta place in Corciano? We go right by there . . .

Next time: Andrea shares his Big Three in Gelati. We’ve only been to one so far but we’ll fix that and report back when we have compared at least two of them. They are going to have to do some hustling to beat the peach I just had at Aldo’s! 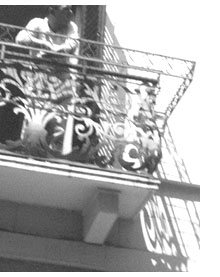