No, this isn’t Halloween, but a WileyReport recap of the Grape Harvest Festival. Who knows what the theme was this year, but it was crazy costumes and wine-dispensing floats as usual. Just another day in the neighborhood.

No, this isn’t Halloween, but a WileyReport recap of the Grape Harvest Festival. Who knows what the theme was this year, but it was crazy costumes and wine-dispensing floats as usual. Just another day in the neighborhood. Digiphotojournalist: Paulette of Frisco. 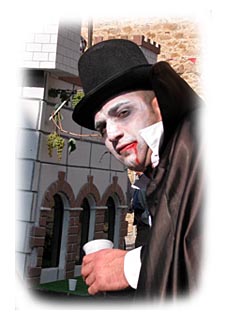 PANICALE, Umbria—After all the excitement of the Road Trip to Rome, the night before- we are ready for the Festa!!! Yeah, go party people! But it is chilly, and rainy and party people are dropping like flies. But Celia and Paulette and Daniel and I are set to go to the cena- and go to the cena we will!

Its absolutely packed and after a long line with loads of women coming through with heaving trays shouting permesso! Are appetites are totally whetted and soon we are sat down on at big plank tables and for 20 odd Euro we are getting bruschetta’s with beans and crostini, garlic and olive oil, tomatoes . . . spaghetti with wild boar sauce . . .grilled pork and veal . . .salad . . .bread . . .wine . . .wine . . .wine . . .oh sorry got a bit lost! And finally grapes with blueberry pound cake and vinsanto. Well . . . that’s wasn’t hardly enough and after all that we made our way to Aldo’s where we met up with Anna Maria a Danish art expert and former dentist and indulged in Cappuccino’s, Proseccos, and Limoncellos . . .yes completely overkill . . . but absolutely incredible . . .oh and gelato!!! We also took many a turn at the Pesca…a charity draw type of thing where you pay a euro get a scroll, and get the prize that matches the number on the scroll . . . we ended up with an ashtray and matching Limoncello glass, an air gun, a fanny pack, a change purse, and a kitchen knife- so some excellent finds!

On Sunday it was a bit rainy and fireworks and parade were cancelled: (BOO!) But, oh well, we had our little blue feed bags that hold wine glasses, that you can get in town to sample local food, wines, fabrics and art. Well, of course the wine was phenomenal. The ostrich meat and salted beans could make you weep… and the biscotti and pecorino with honey just well . . .left you speechless. Now you’d think Paulette and Daniel and I would have been fine with all that, but we had reservations at Masolinos- and you just don’t break reservations at Masolinos- especially with Steffania’s deserts- no way! So we sat in a warm little food hole eating — just about everything! The taligata (thin slices of beef covered in arugala and parmigian) as the absolute show stealer, with the umbrechelli (thickly rolled pasta) with peperoncino, garlic and tomatoes, an easy second place. Wow! And then another bout at Aldo’s- of course- it wouldn’t be Sunday night of the Festa without say a grappa and maybe a cappuccino with amaretto, right?!

These fine festival fotos are from the famous Paulette of San Francisco. The parade was put on when the weather cleared, a few days after the originally scheduled, but rained out date. The float themes are always puns on the word Vino. Vinocchio instead of Pinocchio, etc. but what the Cadillac, discomania theme line was, no one seems to remember. Still researching. Of course with the observers all dutifully on the grape, their testimony is somewhat suspect anyway.

Later that same day, word in from the coast: The Vampire? The Castello of Count Drac-uva. Dracula=Drac-uva. Uva means Grape. Ugh. Italians are less prone to puns than some cultures. But they will stoop to them and they even have a word for them: Giochi di Paroli. Word Jokes. Still waiting for resolution on the word joke based around the disco theme.