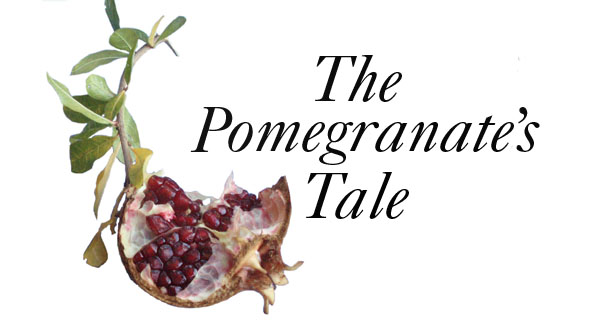 PANICALE, Umbria– True Confession: I was raised on a farm in Iowa. You could tell I wasn’t a native Umbrian? What gave me away? Oh, that accent thing. I’m WORKING on it. But imagine this farm boy’s surprise to find himself watching a big John Deere tractor going back and forth in the distance on a lazy fall afternoon. It is far enough away that I can’t hear its distinctive putt-putting but I know John Deere green and yellow when I see it, even at this distance. But how strange and disorienting. Instead of watching the tractor from a back stoop in Conrad, Iowa, at its level across a wide, flat plain – we’re looking down on the fields and the tractor. We see the Deere almost like a bird would see it from high up in our pocket garden’s terrace.

Even more surprising, it is late October and we’re still in short sleeved shirts and lounging around on lounges we thought had long been put away for the season. The sun is trying to dry some clothes on the line but first it has to work its way through the big fig tree at the end of the garden. FIGS! Can you imagine? I led such a sheltered life that I’m not sure I’d ever seen or tasted a fig outside a Newton, until we found we had a tree full of them in our own yard here. We missed them this year as they are more of a September sort of fruit. They have long since taken that final suicide dive from their high branches, splatting their gooey selves all over the stone terrace there and long since been cleaned up by long-suffering Anna. I do hope she took a few bushels home with her as a preemptive defensive move ahead of the purple rain of fruit. Look at us. We’re half complacent about figs. Yawn, oh, figs. Didn’t we always have a fig? 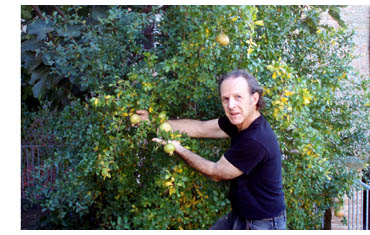 HERE’S A NEW CROP TO SELL AT OUR ITALIAN FARM STAND?

Right next to the fig is this year’s big surprise. Our pomegranate. How the heck did that get there? Is it a bush? Could it be a tree? It is higher than my head and wider than it is high, bent over with heavy, dense, baseball-sized, fruit on every side. I cut the fig back to give the pomegranate some sun last year and the greedy little booger filled that space and more and went on a crazy fruit-making spree. Every day the fruit gets redder and the leaves yellower. Getting closer to the way La Foce’s pommes looked the week before. I know they get more winter sun than we do.

Back to my original question? Where do pomegranates come from, Mommy? One of the best things that has ever happened to us is that Elida knew Nico. And she knew he was an architect and a sculptor and a plant lover. And she further knew he had designs on our garden. In typical matchmaker fashion she threw a dinner party to introduce us and we said Heck Yes, Design Away. He did us a selection of the most wonderful plans I’ve ever been privileged to see. Pure genius what he had in mind for this long, skinny, curved terrace hung between two tiny Umbrian streets. It was hard, but we chose one and said do it just like that. Almost. We took out one sculptural rock – too Zen for us I guess and we took out a single plant. The pomegranate. But yet, we have a pomegranate, don’t we? 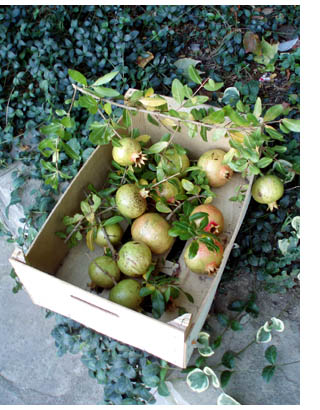 Nico objected to both deviations to the plan, but we won him over eventually and proceeded with out those two items. For a couple months. Our frequent guests and long longtime friends, the Traveling Lambarts, arrived about that time. What great houseguests! They even weed! Nico joined them for weeding and pruning a few times that spring when the garden was so young. And before they left they wanted to surprise us with a gift for the garden. They consulted the maestro and who appeared to think about the idea for a minute and then said, You know, I think a pomegranate would look great. Right about here. Under the fig. Of course he was right. It is perfect. Thank you, Nico. Thank you, Lamberts. Thank you, Elida. It took a village. But we got pomegranates.

All the pomegranates in the photos here were grown and photographed in our Umbrian Garden of Eatin’. We ate the one in the title right on the spot. Some friends were over we had some wine and cheese and what the heck will you have some fruit with that? Why yes, we will. And did. The rest of the “harvest” is in that box you see here and hopefully drying out to become guilded Christmas decorations another year. Is that just too Martha Stewart? Thats what I thought, too, but we’re trying it anyway.

Our goal for ’07: to keep thinking warm holiday thoughts all year round!