CITTA’ DELLA PIEVE, Umbria– Aren’t Saturdays grand? No work and all that. What a great concept. Wait just a minute we’re on vacation. Everyday is Saturday on vacation. Even better concept.

Lets make a list of what we want to do today: Get up late. Check. Go for leisurely coffee with friends in the piazza. Check. Decide on spur of the moment to go to Citta’ della Pieve for market day. 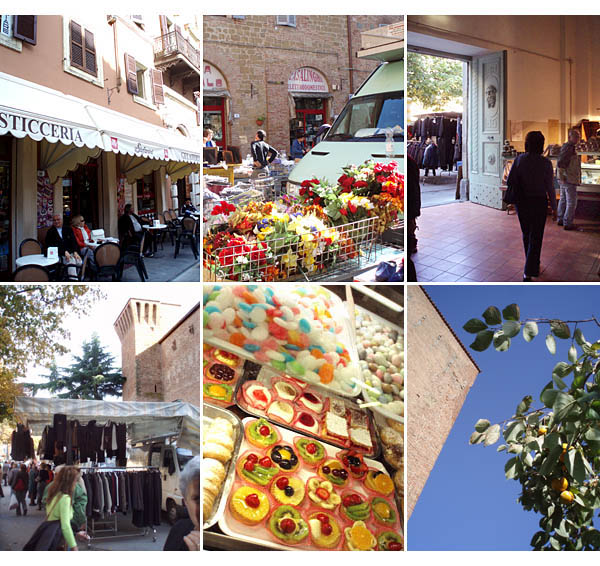 And, thats enough list making for one vacation, we’re in the car and headed down the hill. Its only what? maybe 20 minutes from our house in Panicale so we’ve been to Citta’ della Pieve, lower left of map, a few times and eaten at Piccolo Eatin’ (ok, purists may spell the restaurant: Piccolo Eden) and rented cars from Signore Giorgi at his gas station there. Things like that. But we’ve never just, you know, what IS the Italian word I’m looking for? Hung out. That’s it. We’ve never done that there. Shirt sleeve weather surprising everyone here in late fall, we’re able to stroll from shop to shop up to the city center where the market stalls are set up displaying hardware next to x-rated undie sets, costume jewelry next to collandars and everything in between. All the non necessities of life. Half an hour later we have bags and I can hardly think what is in them. Fuzzy, flowered purses and neon stripped socks figured in there somewhere.

Tried, at 11:30, to get a porchetta pannini. I know they probably are not like health food. But can you smell that? The stand is right there, the guy in the white paper hat and apron is there behind the glass counter, but the pig is gone. Oh poop. So, we trudged down the street, heads hung as low as sunflowers in a winter field. That rejection pushed us into a pasticcieria for a paninni and mineral water break. Ohhhh Shiny objects, sparkly candies, fruit tortes, Sacher (Looks like a big old loaf of dry Tuscan bread but inside it is a super moist and creamy, fruity kind of cake. When the guy behind the counter said it, it sounded like how we’d say “soccer”) More coffee and a plate of those cookies to go, my good man! We’ll be back to Stefania’s pasticceria. We were literally like kids in a candy shop here because well, it IS a candy shop as well as pastry and coffee shop. 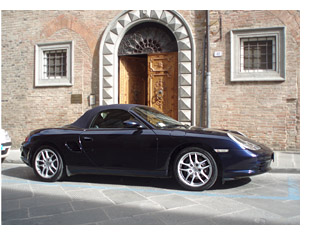 The car shot? That is for Steve. No, not San Francisco Steve, not Palms Springs Steve, not cousin Steve from Maryland, not Aussie Steve. Yet another one. One from Yarmouth. Some days it seems like half the people we know are Steves. And you know, Stew, as a name, isn’t exactly a giant leap away from Steve, is it? Regardless, I just put the Shiny Black, Non-Candy Item in here so Yarmouth Steve would know it was actually all very civilized over here on that side of the pond.

Speaking of that side of the pond, our friend Kiki is there in Panicale right now, so if you see her and Todd, be sure and wave. They will be there through the holidays curled up by the woodstove doing wireless emails on the newly installed broadband. Talk about civilized.