I think, like everyone, I assumed I was the only one shrewd enough to fully appreciate Italy for what it is really worth. But, if you look around at the crowds trying to get in the Uffizi or book a room in Venice during Carnevale you realize, it is a secret we share with a whole lot of other wide eyed tourists.

Yes, I know. I may be preaching to the choir here. 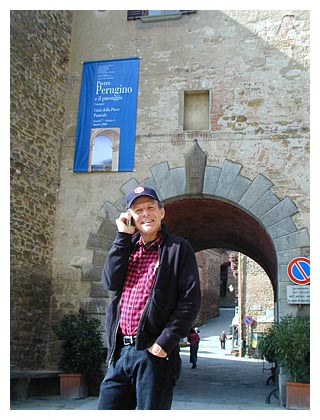 Columbus discovered America. But, I ask you, doesn’t every American feel they have ”discovered” Italy from the moment they first wash up on her sunny shores? Of course, I’m being egocentric when I single out Americans. And, of course, I mean to include all us foreigner invaders from the Goths and Vandals right on down to whatever Ryan Air discount flight just landed this morning in Pisa. Italy seems to whisper its siren song in everyone’s ear. For me, it seemed like a personal revelation. The skies parted, the message was written there clear as a bell: Look at the art, taste that food, listen to the people talk, I have found the Promised Land. I think, like everyone, I assumed I was the only one shrewd enough to fully appreciate Italy for what it is really worth. But, if you look around at the crowds trying to get in the Uffizi or book a room in Venice during Carnevale you realize, it is a secret we share with a whole lot of other wide eyed tourists.

Yes, I know. I may be preaching to the choir here.

I read somewhere a scientific explanation for part of Italy’s eternal charm and magnetism. The light really IS different in Italy. Thing DO look different there. It turns out we are wearing a natural version of rose colored glasses when we are in Itly. The working hypothesis of the book, as I recall, was that the Mediterranean is a relatively dead sea. Sorry if that seems harsh and un-romantic, but look at the ocean at a beach in Maine, for example. It is black and forbidding looking. That is because the Atlantic is chock full of seafood, seaweed, fish and marine life. The Med is comparatively empty. But, an incredibly pretty shade of blue. The whole empty basin is a giant solar reflector, picking up and reflecting the color of the sky. And the lovely Italian peninsula is stuck like a long, skinny pier, out in the middle of that pond. So, the light over Italy is refracted from the water on all sides of it in an actual, unique sort of way. And that affects what we see and how we see it and maybe it even reflects somewhat on the famously sunny Italian personality. 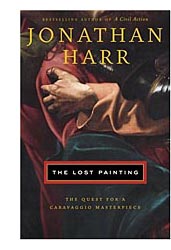 A couple weeks ago, I saw a note in the Boston Globe about dream travel destinations. A question had been posed, and it was: Where in the world would you go, if money were no object at all? According to the survey, done by an affiliate of Expedia, Italy would be in the All Time Top Three Ultimate Destinations. Hawaii and Australia were right in there, too.

But consider this evidence as well: There are two new long-awaited books coming out right now. One is by Jonathan Harr. You may remember that 10 years ago he wrote his first big, successful book ”Civil Action”. Since then, he has published nothing at all but was evidently searching around for a new subject and came up with his real life mystery/adventure ”The Lost Painting”. It is the story of a famous Caravaggio that had been misplaced for a couple centuries. 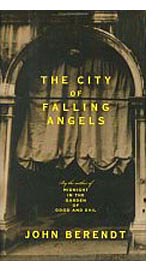 The other author, John Berendt, was also a first time author when he published his wildly successful ”Midnight in the Garden of Good and Evil” (272 weeks on the New York Times Hardcover Bestseller List!) a decade or so ago. Loved his casual, bemused, fly on the wall, observational style. His new book, like Harr’s is also somewhat of a real life mystery. It is called ”The City of Falling Angels” and it goes behind the scenes of the famously, devastating fire at the Fenice Opera House in Venice.

I’m not really ready to do book reviews of either of them, as they just came out. But the subjects attract me and I’ll probably get both of them this weekend. The point is, that both Jon and John were first time, out of the box literary stars. And what was the first thing they did when they could? Well, sure. They did the first thing any right thinking person would do: they took off for Italy and used writing the next great novel as an excuse to hang around for a few years ”doing research”.

Can you blame them?