When I say we, I mean in the Panicale we, sense. Panicale is in a big national travel magazine here in Italy that just came out.

PANICALE, UMBRIA—When I say we, I mean in the Panicale we, sense. Panicale is in a big national travel magazine here in Italy that just came out. Early this morning at Masolino’s, Andrea showed us the new October issue of ”DOVE” magazine with a big spread on our little town. That is DOVE as in WHERE, not as in Turtle Dove. Flashy, glossy, full color ”WHERE” magazine you see all over Italy. Che shock. And it is talking about real estate and what a good deal it is in this part of Italy and how they are going to tell their readers all the secrets of Umbrian Real Estate. We’ve been in some of the properties they mention but it is still fun to see Panicale with its name in lights so to speak.

AND IN THIS CORNER, WEIGHING IN AT . . .
This is the one where Tigre, the cat, explains life to the Great Danes. And their little dog, too.

ALDO’S CAFFE, PANICALE—The brightly red-haired Danish lady is standing by the bar. Is her name AnneMarie? She is there with some other fun Danish friends. Wiley waves Hi to her and we get introduced to the new people. I could not feel more ignorant, than when I think how casual Scandinavians all seem to make learning that second or third or twelfth language look. Anyway, with enough therapy maybe I can get over that. In the meantime, the cute young blonde between AnneMarie and myself has made a circle motion that encompassed all of them while being introduced and said, without any, repeat, any accent, ”Actually, we are all Danish” All this time, AnneMarie has been holding her black and tan pixie-ish terrier in her arms and drinking her coffee, sort of around the dog. So, in a smart-aleck way I said ”Oh, a bunch of Great Danes”! Note to self: attempts at intercultural humor before caffine on my part should be held to an absolute minimum. No matter. Without a nano second of time passing, The Cute Dane ducked down so she was way shorter than her already Very Tall Dane Dad and said pointing up at him, ”HE is the Great Dane. I am just a regular sized one.” Cute and Quick. 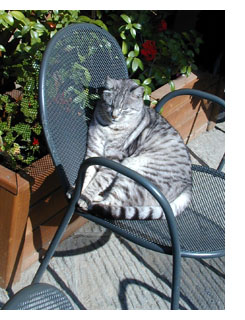 Introductions over, I ordered a cappuccino and sat down with some English people we had just met the night before. The Danes finished their coffee and let the terrier on his leash propel them towards the door, waving back at us over their shoulders. When All Animal Hell broke loose in Georgia. Tigre the massive, uncontested, king of the jungle here must have been dozing in the sun under a chair by the door. And the new puppy must have thought, Hey what is this? And that is when POW! BANG! YIPE! YIIIIIIPE! HELP! Cat, Dog, Danes, and multiple Baristas all blew out through the glass doors, into the piazza. In an unreal scrambled, screaming mass. It was really very like the Popeye Blutto fight scenes where you would see this big ball of blur and an arm poking out here and a head there.

I was kind of trapped behind our corner table but through the window we could see AnneMarie yank the terrified terrier straight up in the air by his collar and strangle dangle him there as high over her head as she can reach. I’m sure Mr. Terrier wasn’t complaining. Hung by the neck like a cattle rustler? Or cut to ribbons by a silver and black buzz saw? That is a tough one. And so is Tigre. Even caught cat napping, he’s dangerous. He weighs in several kilos, surely twice the terrier’s soaking wet weight. Eventually, the animal and people din died down and I could see the Danes wiping the blood off poor puppy’s nose. Ok. Now. Whose piazza is this? That’s right. Sweet, innocent purp, he had no idea what hit him. Other than it was fast, furry, and furious.

Later that day, after everything sort of calmed down and we knew that all the combatants were going to be all right, I said to Aldo, ”Boy, I wish I had had my camera on for that melee”. He just said ”La prossima”. Wait for the next time.