BAYFIELD, Ontario, Canada–Fine weather turned to foul weather and that turned to famously abusive Ike. Just as we were pulling into our Bayfield Ontario on the shores of Lake Huron so was the tail of the hurricane and everything went black. And wet. And wild. They had seven miles of road closed on one side of town. Lakes in people’s yards and standing in the fields of ready to harvest crops. Crazy. We stayed inside and talked cars and apes with Ken Johnson and his wife Delores and went our to eat in the hurricane. I went out barefoot to avoid being soaked and put on my shoes just before getting out of the car and going into the restaurant.

We got up this morning and loaded the Ape on the back of the Tahoe.

And there it is! And now we’ve got an ape following us wherever we go. Looming large in our rear view mirror like some crazed tailgater out of a Steven King novel bent on leaping right over us. So, there’s that. And now we have to do fret about busting thru customs with a 25 year old three wheeled Italian motorcycle. We idled in line for awhile and then explained it slow and carefully to the border crossing lady and her uniformed associates as more uniformed people ran by pointing at it going “what the heck is that?” Finally “pull over there” became the answer we expected. But when we got it inside a real matter-of-fact crew cut guy said “who’s importing the scooter?” I raised my hand. And asked if I could go to the bathroom. We’d been driving forever. The guy sighed and waved me to the elevators. Just like I’d planned, by the time I got back down, a responsible adult, Paul as it turns out, had pretty well settled everything and they were stamping my papers with what they no kidding called “the full BS stamp of approval” and we were solid gone before they changed their minds. No tax, no charge just “have a nice day.” 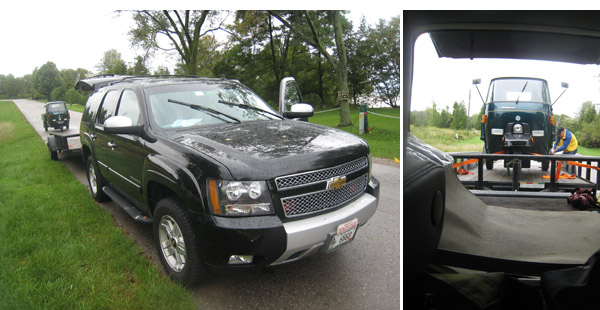 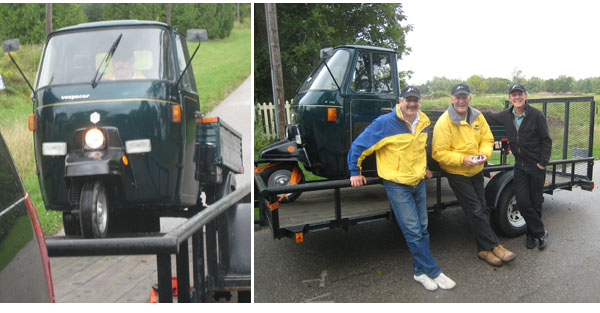 LAND OF THE FREE AND HOME OF THE APE

Finally. We’re back in the US, back in the US and we seem to have a newly naturalized ItaloCanadian with us. Can’t wait to get this little green bit of Italy settled into life on the farm in Gray, Maine. We’d be well on our way but now we’re sorting out Paul’s Lancia in the morning. And starting our caravan of Italian cars across America to Maine.

See you in Ape, (I’ll be the one waving like mad and grinning my face off)

RICHMOND, Onatario–Who knew. Canada is a hot bed of all things Italian. Look, Enzo’s No Frills market, the Palazzo Hotel, and most importantly, Eric’s House of Strange but Good and very Foreign Cars. Like opening King Tut’s Tomb for us. Several very sharp, very hot, very Italian Lancias and Paul is sorely tempted. We’ll see. He’s in at the Coffee Bistro here on Yonge in this Toronto suburb discussing road clearance and four wheel drive valves or whatever. He wants that hot rod. We’ll see how badly he wants it.

And yes, I know, the Figaro is Japanese. You caught me out on that. But see? It’s a natural fact. Everyone WANTS to be Italian or appear to have that Italian flair. Hence the operatic name for this eccentric buggy. Oh, no. I want it too. Devil get thee behind me. Hold out for true Italians. Sorry to insert this but you may never see another one of these. I saw one, once in a snooty part of London. This guy has one in every color ever made! My idol. Eric of Canada.

So, this is diversion one. But not too bad. If there is anything I have learned in Italy it is to be open to the moment. And at this moment we’d be driving right by this Lancia to get to the Ape, so let’s go. Oh, here’s Paul and it is YES. There goes my co-pilot for the ten hours from Buffalo, NY to Gray, Maine. Don’t think we can tow the Lancia behind the trailer full of Ape. An Italian car caravan across Northeastern North America. Where is PBS or BBC when you want to film a documentary?

We’ve coffee’d three times so far this morning with various degrees of success. But if you get near a Bob Evans wow. Have what I had. Country something. Biscuit cut open and layered with hash brown, real crispy, white sausage gravy, crumbled sausage, an egg, grated cheese. You gotta love that.

Ok, Paul is in paying his down payment and its about 1 pm. We’re still on the east side of Ontario where we started the day at the aforementioned Bob Evans. Come on Paul. We’’ve got an Ape waiting for us on the west side of this province on the sunny shores of Lake Huron. Who’s been there? Lets see a show of hands. I’ve never been and can’t wait to see this part of the world. 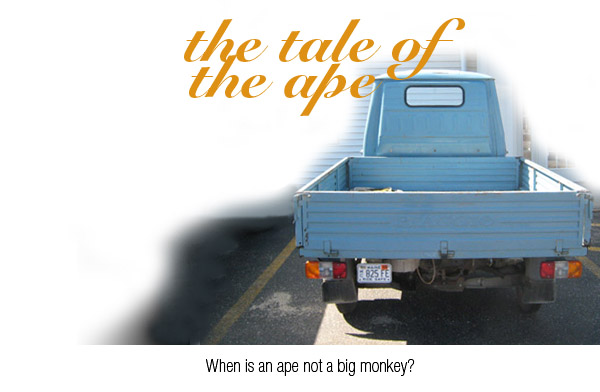 CATANZARO, Italy to FALMOUTH, Maine – True fact. I’ve always, I can prove it, always, wanted one of those tiny putt putt Italian trucks, the venerable Ape. And now. Our friend Paul has one! And I don’t! Paul’s not only got one, he’s got one in Falmouth, Maine.

Yes, this baby blue bundle of toy truck was parked right outside our office and it is a real live Ape. English speaking people would, on seeing those three letters together say “ape” like, you know, our revered ancestors we supposedly evolved from. Italians say it like “aaah, pay” and it means, “bee”. Like bumble bee or honey bee. Ape is from those fine folks at Piaggio who brought you the Vespa. Which, by the way, means “wasp.” See a pattern forming? Why, oh why, you ask, do they do this? Bee cause of how they all sound. 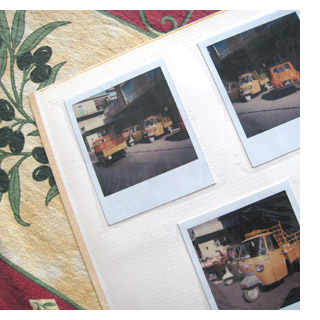 Enough of the entomology of the insect-based brand names, let’s gather round all the real gear heads and talk about how this lost ape found itself in Yarmouth, Maine an ocean away from its native habitats of downtown Rome, Florence, Torino, Naples and beyond.

An almost seamless, zero degrees of separation chain of events seems to have caused this turn of events. Paul saw the classic Vespa on display at our office (from the legendary T. Turner Collection) and as guys trying to avoid real work will do, we got to talking and discovered we both really aspired to an Ape, someday. To me, someday means some day. A day off in the future. Many, if not most people go on vacation and come back with pictures of the Trevi Fountain, or the the Roman Coliseum. I have pages of Polaroids of Apes as far back as 1982 when this affliction first manifested itself on an extended stay in Calabria. And I even have brochures with prices scribbled on the back, in lira, by our friend Giuseppi. He got tired of hearing about it and called our bluff and said “So, order one, already. I’ll get it shipped over. Che problema?” How much was 4,182,000 lira worth in 1982? Whatever, twenty five years later I’m still musing about an Ape. Twenty five minutes later on the other hand, Paul is not musing about one, he’s driving about in one and there it is in our parking lot. Ok, maybe it was a month or so, but still. No grass growing under this ape. 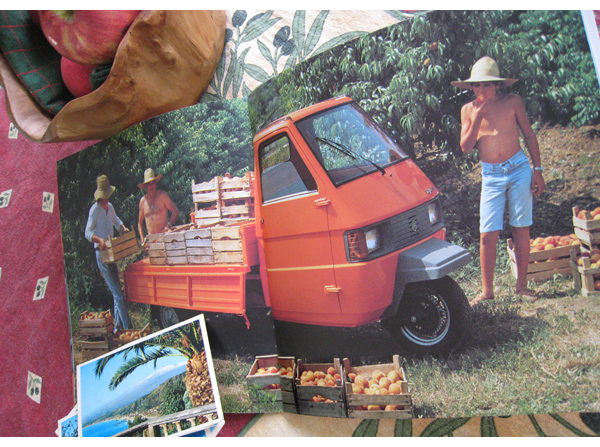 MOM, ALL the OTHER kids have an ape. PLEEEZE?

When we were looking at the Vespa here, I mentioned Sean Potter just down the street here, who ALSO has one. Paul found Sean and found out there had been an Ape on eBay and before you could say “andiamo” he had made a deal and roped another friend into a road trip to Jersey to pick this one up. It is a 1982 coincidentally. With almost no miles on it. Or kilometers either. 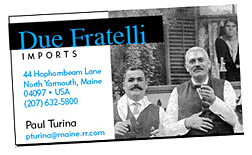 Paul had the great good sense to figure out how to rationalize this. It is not a new toy. This, my friends, is a business expense. Yes, yes it is. Really. He’s importing his family’s great wines from Italy, and this will be his delivery truck for the greater Falmouth area. Stay tuned to this bat channel to see the graphics we’ve designed for this baby ape. Coming soon. You’ll be the first to see the reveal.

For anyone who wants to see all the apes in the world, check out the Gallerie on this Ape site. If Vespas are your cup of tea, there seem to be an amazing stream of them on eBay coming in from Viet Nam. Oh, yes we’ve been stung by this ape/vespa bug. Look what you’ve started Paul. First, your totally addictive rose’s and now planting the ape seed in my mind.

Finally. It is my turn to pack up the laptop and head off to the airport. Pilot, head this rig east to Italy! Can’t wait to see daughter, Wiley. She is the legendary Wiley Traveler. Anxious to see what adventures she has had. And together see all our old friends and new property listings! What to do, what to do? Dinner at Masolino’s first? Or coffee and hot gossip at Aldo’s? It is like the old Seinfeld program. A show about nothing. We never know what a trip to Umbria will have in store for us. I always try to stay open and flexible but things always flood in from all sides, time evaporates and I will be back on a plane headed west long, long before I will want to be. But, in the meantime, I fully expect to enjoy every moment to the max. Oh, I have to share this. No, this is not a photo taken on a back road of Umbria. But just something designed to give me quantum nostalgia for the back roads of Umbria. A perfect little purple Ape, separated at birth from its homeland and somehow, someway transported to an apple orchard in northern Maine? I slowed down, shook my head and turned right around on a side street in Portland, Maine when I saw this beauty. Vintage 1969. And who knows why they call these Apes and their cousins, the motor scooters, Vespas? You in the back. That is correct. It is because of the sound they make. Like Bees and Wasps, those Apes and Vespas buzz up and down the streets of Italy. And at least one street in Portland.

Allora, if you will be in Panicale in October, we will wave madly, and say . . .