PANICALE, Umbria–To say Bruce likes to paint while he’s in Italy, is like saying The Pope has a bit of a religious background. Bruce has stayed at our place in Panicale before and I’ve always admired his painting of Panicale. But, I’ve never been there when he was there. It was fun to catch him in action. And easy, too. Here’s why: Panicale is small. And he’s out on the street, in one spot, painting until he’s satisfied he’s got it right. And that was true every day unless it was pouring buckets. And we knew when night had fallen, because he would actually come home then. 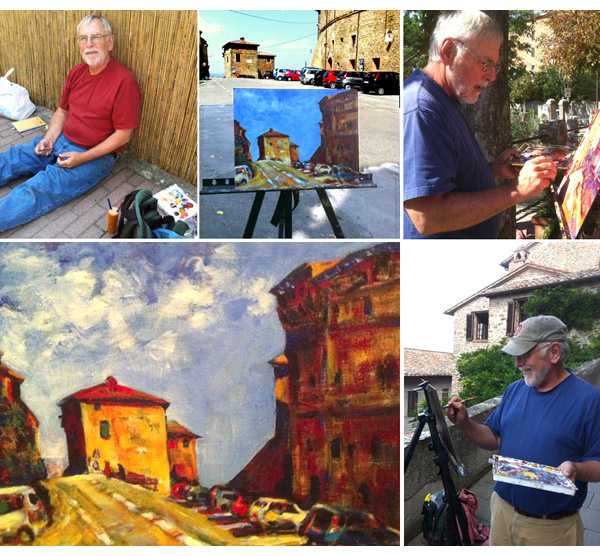 But lunch? Not so much. We’d be eating something fun, basking in the lunch-time, garden sun, plucking a fresh fig off the tree to nibble on while reflecting on the flowers close at hand or the lake in the distance, when I’d realize Bruce was MIA. “No problem” Kiki would say, with a dismissive wave of her hand “he’s painting.” She was right, he could not be lured away from his art. It didn’t matter if he was a few houses away, or on the other side of town, he made it clear, he’d much rather paint than eat. He’d pull a candy bar out of his pocket and keep on painting up a storm.

I so admire the passion. And the paintings that are the tangible results of that persistent passion. Complimenti, Bruce, complimenti, pure. 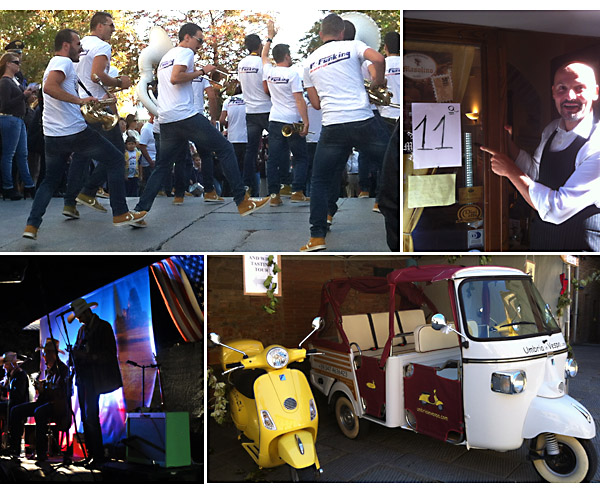 Usually when it comes to car rentals I’m lucky to get a coupe let alone a coup. Have to say I think I scored a coup this time. First of all, this is no ad. I only wish I got paid for anything I said here. So, we went to Expedia where our daughter had such good luck in Italy last month. Typed in Rome and Nov 1 – Nov 16th and it was $600 plus USD. which isn’t terrible. $300 a week. And as we all know, car rental is a big part of any trip to any place. Necessary evil. But often the trip money we most hate to part with.

But then I thought I’d compare it to Kemwel. They’ve had good prices the last couple times we’ve gone to Umbria via Rome. So, I googled them up and typed in the same exact details. Now, I don’t want to sound brag-y or anything but -$406. For 16 days?! That’s what I thought. Should have seen how fast I got that paid for.

No idea what the deal is. One of the joys of off-season travel? Crisis in Greece? Who knows? Who cares why at this rate. I mean, look at the very next car down. $648. For a TWO door. Versus our FOUR door. And scroll down like maybe three or four cars and there is THE SAME EXACT CAR. For almost $700! And if you wanted that same car with an automatic it was within pennies of $1,300. Holy cats, Batman! I know, I know. Not everyone can drive a stick. But this corn-fed Iowa farm boy, I assure you, can. For that money you can go back to school. Driving School. And learn how to be shifty like me. The absolute only thing I can see different is that on our fab rate the mice type says “off airport supplier.” Well, ok, but for $300 you can shuttle me halfway to Sicily before I start complaining. But still. I thought I ought to do due diligence. So, I called Kemwel and asked and they said I should take the “Advantage” bus right from the curb and it is a five minute shuttle to pick up the car. Don’t worry. If it’s a total bust, I will Man-Up as they say and report back.

I have no idea if this rate is a fluke or that day only or what. Whatever it is, at this price, I’ll take it.

early autumn in Umbria, Italy, by the pool. does it get any better?

This email just made our day, our week, our year. THIS is why we do this real estate match-making. The words and photo here from happy clients/great friends says it all. 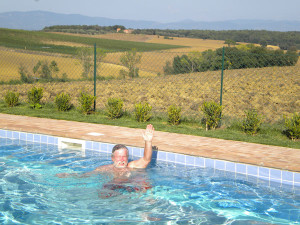 Peter and I have been here in Italy for a glorious three weeks. The weather, food, and friendship has been more than we could have ever dreamed of. We look forward to our next trip at the end of October and sharing some memories with you both such as finally having you both to our home for dinner! Hope you and family are well.

Peter says “ciao” from the pool!!!

Come along with us on Twitter? We’ve already started posting Italy-related tweets daily. Check out today’s post on the fab Grape Harvest Festival gala weekend in Panicale that starts on the 17th of Sept. 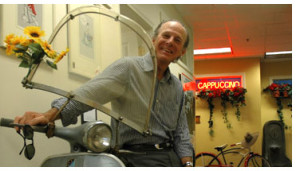 Our long-overdue, much-postponed, trip to Italy is FINALLY coming right up. We’re looking forward to seeing friends and new real estate listings October 16th – Nov 7th. Come along with us? Following our 1960 Vespa will be counter-productive. What with the annoyance of the Atlantic Ocean and all. But you can easily follow us on Twitter. We’ve already started posting Italy-related tweets, daily. Check out our post on the fab Grape Harvest Festival gala weekend in Panicale that starts on the 17th of Sept. Here’s how: Go to Our Twitter Home Page and hit the “follow” button in the top left. You’ll be right there with us as we visit places like Panicale, Siena, Torino and who knows what other shiny objects Italy will dangle in front of us.

Call it what you will, we have broadband at our place in Panicale and our intent is to use it to post something “short and tweet” every day. We’ll include iPhone pictures, a couple of words and interesting links.

There’s a blue Twitter “T” logo on the top of every page on our site now – so you can get to our Twitter page that way, too. Isn’t technology grand?

See you in Italy! In October. And right now on Twitter.